On August 16, 1977 Elvis Presley died. It was with transit Saturn inconjunct progressed Ascendant and transit Neptune conjunct natal Ascendant. Progressed Sun - the sun had just recently changed sign!- had been quindecile natal Neptune and conjunct progressed Saturn. There is more (see the post, link below) but you may notice a lot of Saturn and Neptune already. Saturn-Neptune is the combination of illnesses. 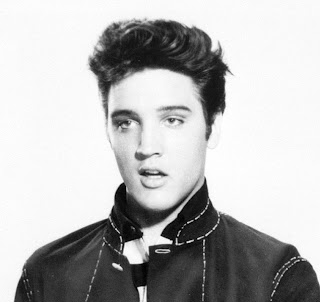 Let us talk about Elvis Presley's talent. Quoting myself:
Watch his fan sites...There are even people who do not believe that he died and they keep hoping that they will see him again one day. That is the effect of being an idol. As he is not real (Neptune on top) he stayes alive in everybody's imagination.
http://art-astrology.blogspot.com/2008/12/astrology-chart-elvis-presley.html
The pattern of talent is in the Moon in Pisces and ruler Neptune sesquisquare Venus, with Venus rocking with Uranus (square). Venus-Uranus-Neptune combinations are frequent in the charts of pop singers. How to read this? A hype in popularity? Sense of rhythm and modern art? Does it matter? Because it is so easy to see that this is a popular man! Moon is 'calling', Jupiter rises before the Sun and Neptune is elevated. Moon with Jupiter and Neptune just needs the public and vice versa. The small trine of Jupiter and Neptune with the Sun points at the 'devoted audience'. This small trine is a prominent small trine because of the positions of Jupiter and Neptune. Other indications for fame and money are Venus quintile Jupiter and opposition Pluto with Jupiter 157.5 Venus/Pluto. Here is the chart:

And he loved dogs...
http://astropost.blogspot.com/2009/02/sun-trine-neptune-dogs-rescues-and.html