Transits on the road 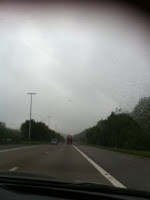 Usually I don't make notes or keep a diary (and I really plan - again- to do that from now on). But, during my holidays in France, I did and noted the position with the help of my apps. See for example the mail about the Virgo Moon on my Descendant and the desperate need to wash my hands:).

This post is about what happened during some more transits that I had in August: Jupiter inconjunct Saturn (ups and downs), Venus trine Sun (nice time!), Mercury-Jupiter opposition and trine (swift transport and communication), Mercury-Pluto conjunction (@$%&!), Jupiter inconjunct Quaoar (going out, but...).


JUPITER-QUAOAR AT THE START
When we left home, transit Jupiter was inconjunct Quaoar to illustrate the international perspective and things you forget, like passports and hand bags. Should Jupiter-Quaoar mean 'new perspective for a voyage related to a loss'? Next time I won't leave on such a day. And in particular not because it was also a Mercury-Neptune day (see the post). It kept us in Nancy for a few days longer. That wasn't so bad at all. Now we could see Place Stanislas (with a lot of golden gates). Stanislaw was a Polish king and the Duc of Lorraine in the 18th century and he is wanted this place. Not surprising that his Sun is 'calling' (without major aspects in orb 5 degree or in sign) and his Moon is in Leo. Glitter and glamour!


A NICE TRIP WITH QUESTION MARKS

We continued the trip on a day with transit Mercury opposition Jupiter. We changed the destination on the way because of the weather reports but it was a nice ride without problems. The weather got better and better. That is because we went South...

THE HAPPY HOLIDAY
Then, finally, with transit Jupiter trine Mercury (that is the day that I should have chosen for departure time. Mercury-Jupiter is good for traveling and communications**). Later, with transit Venus trine Sun (conjunct Pluto and sextile Neptune) we enjoyed the most beautiful view from a camping ever and nice weather for about 15 days. This is a photo taken from our place. Looks like trines, isn't it? 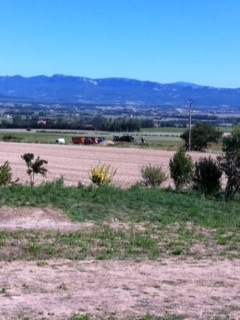 JUPITER-SATURN, UPS AND DOWNS
But all things come to an end.
When I was in France transit Saturn was exactly inconjunct my progressed Jupiter. That was the day that I bought souvenirs and suddenly felt homesick. Impossible, you'd think. France is beautiful, nice, charming and the weather is fine. Lavender, sunflowers, peach trees, tomatoe plants and medieval villages, sunshine, nice old men saying 'Bonjour, Madame'... 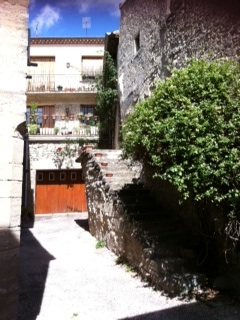 What more do you need? Well: home! You have to get back anyway and once you start thinking about it, just go. We do. If we can, we use to return one or two days earlier than we planned before, always. Silly but true. Si hemos de entrar en el desierto,  ya estoy en el desierto... (If we have to enter the desert, I am already in the desert). This is my desert and that is in front of my home. They are doing the street...
BACK HOME WITH MERCURY-PLUTO AND JUPITER-SATURN
Anyway, what happened when we drove back home, just two days later? Trouble, trouble and trouble...3 times. Damage for the caravan, having to repair the car after a sudden stop at the busiest roundabout in town, and in between a hard fall on my knees*) because of the instable planks. Someone in front of me hit a plank and I was launched to the ground. This all was followed by a tetanus injection, Betadine, bruises and for the car a conflicting garage bill.

*)I fell with transit Mercury exactly conjunct my natal Pluto in the 6th house. Mercury-Pluto doesn't seem to help or ease any transport or communication.