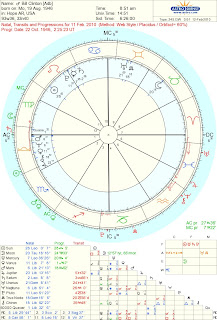 Bill Clinton underwent a sudden heart operation yesterday, after complaining of pain. Here is his natal chart with progressions and transits. Transit Neptune (ruling the 6th house of illnesses and ailments) is opposition natal Sun right now. Sometimes the effect of Neptune opposition Sun is 'being seen in a negative light'. Sometimes the aspect is reflecting a health issue. That is because the Sun is they symbol of honour and of vitality. Also transit Chiron is now opposition natal Sun, mirroring 'healing'. Transit Saturn is in the 4th degree of Libra, close to the Ascendant and semi square progressed Mars. That is a statement for blocked (Saturn) energy (Mars). There were 3 indications at the time and when that is the case, sometihing of importance follows, often. There is another important transit coming up for Bill Blinton...

Use this link to see all posts with the name or the chart of Bill Clinton.

If Bill Clinton's Ascendant and Midheaven are in the 6th degree of cardinal signs, like in this chart of Astrodatabank, transit Saturn and transit Pluto will be afflicting his Ascendant, his Midheaven and the crucial midpoint AC/MC this year. It has been most fortunate that today transit Jupiter is inconjunct Ascendant and Midheaven and quindecile AC/MC. Jupiter is the symbol of doctors and of what cures you. Later this year transit Jupiter will have moved on in Pisces, but the hard guys (Saturn and Pluto will still be in hard aspect with the Ascendant. That might force Bill Clinton to take care and perhaps this pain and operation should be seen as a warning not to force himself and to consider his age and health.

The congress will be translated in real time at english and spanish languages.

Many thanks for your cooperation.