The progressions of Lily Allen

This is the drawing of the natal and progressed positions for Lilly Allen, with transits and without hour of birth. The progressions show us how the changing progressed sunsign and the transit of Jupiter and Pholus with the progressed Sun, in the same period of time, turned her into a celebrity.

I read that Lily Allen created a MySpace account in November 2005 (with transit Saturn square natal Sun) to launch her music, after being introduced  to London Records - without results - using her father's connections in 2002*). That was just before her progressed Sun sign was changing. When the progressed sunsing changes, life changes.
One month later, in December 2005 transit Pholus was opposition progressed Sun and transit Jupiter also was opposition progressed Sun. That is a statement for a positive (Jupiter) turning point (Pholus) in life's development (progressed Sun)...shortly after 'changing lifestyle'.  Those three indications together were for a boost in her career.
Isn't it nice that so many famous persons seem to have listened to the ' tides of time'?
Charts offer more than one chance or direction, mostly and they should always be seen in the light of situations, conditions, gender, genes and education, for example. If you want to know more about the positions on May 2, 1985, continue...
Lilly Allen quit school soon. There is ambition, however (the prominence of Saturn) and there are indications for success (like Sun-Jupiter-Uranus and Mercury-Jupiter). Also, on her day of birth there is the pattern of artistic talents and a yod with a finger pointing at Mars. 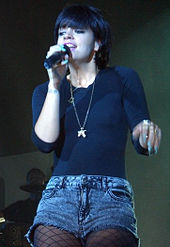 PATTERN
- Moon is in Libra, possibly opposition Venus (for sense of style and feeling what people want and need) and both are in conflict with Neptune. That is part of the pattern of artistic talents. This pattern consists of the aspects between Moon, Venus and Neptune, related to the signs that they rule and in aspect with Midheaven. See Art&Astrology for examples of artists with that pattern in their charts.
COMMUNICATIONS (VOICE AND WRITING) AND USING DRUGS
- Mercury sextile Jupiter is the tightest aspect, followed by Neptune sextile Pluto and both inconjunct Mars: yes, a YOD pointing at Mars in Gemini in mutual reception with Mercury in Aries, adding discussions, speed writing and fast thinking to a drug problem that had to be overcome. I read that she used ecstasy and even promotes the use of XTC. She used to sell it to make a living for a while...From time to time Lily Allen gets 'lost' and comes back (one of the possible ways to reflect the yod with Neptune (fading away) and Pluto (reorganisation) with Mars (work, energy, drive).
CREATIVE AND INVENTIVE
- Sun biquintile Uranus is for the creative outsider. Lily Allen was a drop out. She left school (or was expelled) and she left home.
- Jupiter is rising before the Sun, Mercury and Venus (for the international and the positive attitude)
- The combination of Sun, Jupiter and Uranus is for being inventive and the possibility of sudden success.
A few other well known persons were born on the same May 2, 1985:
They all apparently used the finger pointing at Mars to start a career in sports, racing, skating, footballing, baseballing, playing tennis to achieve a high(er) ranking in society. I'm curious about the angular placements in Lily Allen's natal chart, but (sigh) it takes a birthtime to know them...Perhaps it would explain why she choose to use her artistic talents for a career. I bet that it was because of her genes, since Ceres is trine her Jupiter. BTW I am glad to see that she plays the guitar, too. Mars is for hitting/striking and the use instruments, too...
*) Lily Allen has a prominent Saturn without major aspects.. Saturn is the symbol of parents and ambition. The promince of Saturn shows the importance of ambitions, parents and parenthood (and much more, depending on the natal chart). An unaspected Saturn could be seen like this:
Saturn = seeking for stability and security, status. Of course an unaspected Saturn will be found in the charts of those who work in the government, construction, with the elderly or in any hierarchy.