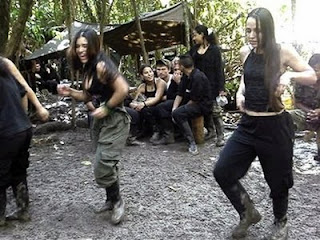 Tanja Nijmeijer has been charged for kidnapping. The USA wants her. She is a Dutch member of FARC (the Columbian terrorists who kidnapped Ingrid Betancourt and many more) and she is still in the Columbian jungle. What in the positions of her day of birth indicates why she left home to spend the rest of her life in the jungle?

Tanja Nijmeijer is an Aquarius with Sun inconjunct the 'calling' (not aspected) Mars. Maybe that is just enough. But let's go through it one by one.
1. Drives, activism, the military, adventure...that is Mars. And when Mars is 'calling' you just can't resist adventure.
2. Sun inconjunct Mars says that her life is related to unbalanced drives and adventures and that she may even loose her life in a battle.
3. Neptune is rising before the Aquarian Sun. She is an idealist, a dreamer who wants to change the world.
4. Neptune is related to Venus and Mars in a golden Yod and the finger is (again) pointing at the god of war: Mars. This golden yod says that there is a romantic passion leading to fighting and war...


Even without an hour of birth it is clear that this will be someone who 'goes for it'  when her ideals are involved. For this she crosses borders and lines....That is because of the Sun-Saturn affliction.


Her progressed Sun is inconjunct Saturn (a very difficult aspect) and transit Uranus is almost conjunct progressed Sun now that the USA charges her. It might just be the end of an adventure. In the natal chart the Sun is opposition Saturn, resonating the responsibility that is part of that jungle game. When Saturn and Uranus meet in a chart, there is always the issue of   limited freedom and the urge to break free, or the end of freedom. Now that she is on an official 'wanted' list there is little chance that she will manage to get out of the Colombian jungle alive and/or as a free person.

More about Mars and war on this blog....and all about FARC on this blog (collected by Google).
Geplaatst door Astromarkt op 1:29 PM