We use to celebrate the new year on January 1, 0 hours, but that is a rather artificial date to start the new year. The astrological New Year begins when the Sun is on the equinox, on his way up to the North. That is with Sun at Zero Aries. Winter begins with the Sun at Zero Capricorn. This year that is on December 21 at 11:38:30 p.m. (23:38:30 hours) Greenwich Time. That is on December 22 at 00:38:30 in The Netherlands, Belgium, France and Spain, for example. In those countries the Sun will be opposition Midheaven when the winter starts. Winter Solstice in New York (18:38:30 on December 21) has no angular placements. I don't know if solstice charts have a special meaning. I think that they mean what a 'January 1 zero hour' charts means: a picture of a moment in time with a special meaning for those who find it a special moment. But...

If the positions at solstice time are valid for the next 3 months for all places, than I hope that the Jupiter conjunct Uranus square Mercury-combiation will be the reflection of relief in transportations soon, but as long as Mercury is retrograding we can't expect much. The winter weather causes delay all over and experts say that the second cold winter now (with few solar activity) might be the beginning of a small ' ice age'. I won't ask Al Gore where global warming is when you need it, but I anticipated for the tropics and loved the palm trees in the garden and see what happens in my icy cold garden: 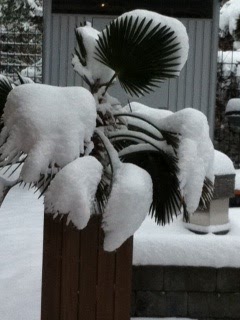 ECLIPSE
Today was the lunar eclipse in the Sarosserie 13 North, the one that started on August 14, 1776. According to Bernadette Brady's book "Predictive Astrology' this one is the member of a family of eclipses ment for groups and projects with groups. Those projects require separations. The eclipse should be experienced as a separation and later as a group achievement. This eclipse number occured in 1992 and in 1974 and in 1956 and in 1938, always in Novemer or December. Perhaps lots of travellers now feel separated from their groups and families. I hope that they will get home soon!
Those who have a placement in the 29th degree of Gemini (Sun, Moon, Ascendant, Midheaven) or a progressed placement there might notice the effect of this eclipse more than others do. Continue for experiences with eclipses and famous examples...

EXPERIENCES AND EXAMPLES
I had a solar eclipse in the 4 North serie in 2002, spot on opposition Sun and Midheaven, when my sister went to Greece for a thalasso therapy because she didn't feel well. A few months later she died. This eclipse happened to be opposition her progressed Sun.  Coincidence?
On the brink of 2010, on December 31, 2009 there was also an eclipse (12 North, 10th degree of Cancer) with the meaning of chances to be responsible. Anyone with the (progressed) Sun, Ascendant, Midheaven or Moon in that degree who experienced 'great responsibilities' or new obligations in 2010? I have two examples of persons born July 1 (with the Eclipse of December 31. 2009 on their natal Sun): Lindsey Lohan (see the post about her) and football player Patrick Kluivert. He stopped his career as a football player in 2010, but still works as a technical coach.
The solar eclipse of August 1, 2008 was square the Sun and Ascendant of Prince Willem-Alexander of The Netherlands. The sarosserie 10South points at a stiuation with problems and having to accept a given solution. In that period of time the Prince bought a house in Africa and he was forced (by the government) to stop the project.


How is Al Gore doing this winter? I see Transit Saturn in the 17th degree of Libra, soon moving backwards to square the natal Sun and progressed Venus again (twice). Saturn will be opposition his Midheaven in October 2011 and later (in November 2012) transit Saturn will be square Ascendant (deep down in the chart). Saturn happens to be the symbol of ...cold, ice and ...separation. This year Al and Tipper Gore separated. You can see the post about the announcement here.