I have written several posts about limitations of freedom as a central issue in the charts and lives of persons with a prominent Saturn-Uranus complex. (Use the label 'Saturn Uranus' to see them all and see the links to older posts below). A new example of this combination of freedom, restrictions and the struggle in between is Jorge Videla (August 2, 1925). Recently he has been sentenced to jail for his part in the disappearances and deaths of thousands of young opponents of his severe regime.

TO BE RESTRICTED
Jorge Rafael Videla is the former leader of the junta in Argentina. In his chart the Sun is square Saturn and sesquisquare Uranus with Uranus opposition the midpoint Sun/Saturn (and Saturn-Uranus in a sesquisquare). The combination of Saturn-Uranus, highlighted by the aspect with the Sun, is the combination of limited freedom. That is correct. He is in jail now.
TO RESTRICT
His junta was guilty of many crimes and restricted the freedom of the people. Not all of the crimes have been solved, yet. This is the chart of the day that Videla was born. The positions of his birthday contain a lot of information about the potentials and possibilities of suppression, like Sun square Saturn (managing to be in charge, preferably on your own). He is not the only dictator with a Sun-Saturn aspect. Chavez has it, too. The natal Sun of Videla is also sesquisquare Uranus. That makes Saturn-Uranus (the theme of the restricted liberty) an issue in his life. 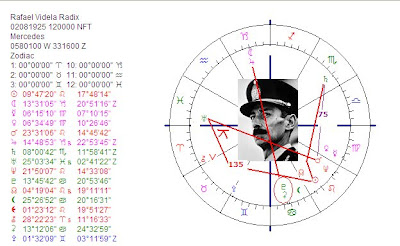 AND:
In fact, the chart shows an ambitious strategist with an urge to make immediate changes (with the risk to loose the fight in the end) and with the issue of restrictions as a main theme in his life.