AL GORE/ARAFAT and the NOBEL PRIZE 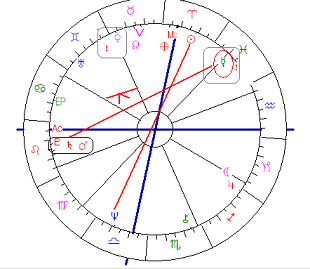 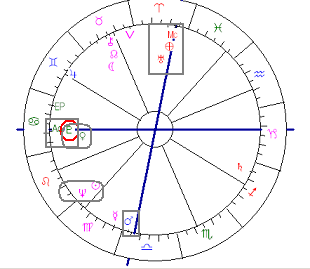 This is about the NOBEL PRIZE (AL GORE AND ARAFAT both won the prize and see how much their charts are a look-a-like). The first you see is the chart of Al Gore.

What is it that Yasser Arafat and Al Gore share, except for the Nobelprize for Peace? Both have a planet on the 11th degree of Aries (Dane Rudhyar, freely translated, said this degree means that the administrator of a country is official inaugurated). Very convenient for astrology!:) They share about 8 aspect combinations.

Al Gore has Sun quintile Uranus. Yasser Arafat the biquintile.
Al Gore: Sun opposed to Neptune. Arafat: Sun conjunct Neptune. Al Gore: Sun trine Pluto. Arafat: Sun semi square Pluto. They share minor and major aspects between Moon and Mercury, Moon and Venus, Mercury and Saturn, Venus and Pluto kaders), Mars-MC and an MC in Aries. One, a fighter, received the Nobelprize for a Peace that never really existed. The other, consuming large amounts of energy for his own house, gets this prize for a movie about the environment.

Yasser Arafat is born on August 24, says Wikipedia, but Astrothème and my computer program say August 27 1929 at 2 a.m. in Cairo. Pluto is crucial on the Ascendant, Neptune is oriental conjunct the Sun, Mars and Uranus are on both sides of the meridian. We see an influencial ideologist and terrorist/freedom fighter (depending on which side you are). The 900 million he kept for himself could be contributed to Venus conjunct Pluto and Neptune in the second house.

Al Gore was born March 31, 1948 at 12h53 in Washinton. Minor aspects (only) are afflicting the oriental Mercury. Venus is calling, too. We see a communicator with diplomatic talents. The most narrow aspect in the chart of Al Gore is that of Mercury inconjunct Saturn (he should have to stop thinking in doom theories:). Saturn on the midpoint Mars/Pluto in the first house seems to be pointing at the nasty sides of political struggle.

Wikipedia mentions that during the campaign for the presidency of the USA Al Gore said misleading or false things. The same thing is happening now with An Inconvenient Truth. Recently a British judge judged that there are nine mistakes in this famous movie. Mistakes of great importance, I think (the period of time it takes for the sea to rise 20 feet, the facts that no polar bears drowned and no attols were evacuated, the fact that there is no exact fit at all between the graphs of carbon dioxide levels and temperatures over 650.000 years.

Al Gore has an afflicted Pisces Mercury inconjunct Saturn ('doom'theories and fantasies). That is one of the reasons that I doubt his theories just as much as I doubt Nostradamus, the Maya-calendar and the global effect of the position of Pluto conjunct the Galactic Centre, seen from earth. And it is not to be expected (astrologically) that there will be no other doubts. Next April Uranus will square his Progressed MC, Neptune will be inconjunct the Ascendant and Saturn will make hard aspects to both the natal and progressed Sun in the second half of August 2008. Well, time will tell...