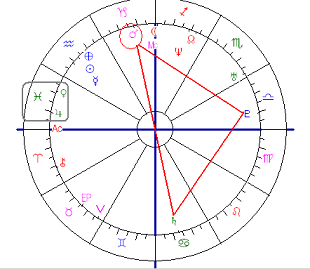 The Canadian child abuser, Christopher Paul Neil, who recently was arrested in Thailand, was born 6th February 1975 in New Westminster (BC, Canada). That day Mars, planet of sexual activity, received hard aspects. In the chart of Neil Mars is evident in the wrong sense of the word. And the planet of the international (Jupiter) is 'calling' in Pisces. This points at the possibility of being religious, but also at possible self indulgency at any level.

Mars is oriental on his birthday (rising before the Sun) and heavily afflicted. The prominent Mars is making hard aspects with Saturn (an opposition) and Pluto (a square). Notice the combination of violence and danger! The closest aspect in his chart will be Venus inconjunct Pluto. The combination of Venus and Mars with Pluto, afflicted, points at problems in (sexual) relationships. Unfortunately sometimes this is an indication for using sexrelated violence of force. A male with sexual problems went to a place where it is more easy to do as you like...

Neil has Jupiter in Pisces without major aspects. That refers to a calling, in his case for priesthood. It also points at 'abroad'... About five years ago this man left Canada for Asia (Transit Pluto conjunct progessed Sun and Sun Arc Jupiter sextile Sun.) This might have initiated a period full of chances and lack of social control. This year his progressed Sun was conjunct Jupiter (for being satisfied and content). Jupiter however also is the planet of justice. It seems that he must stay abroad a while longer, now. Transit Saturnus recently made a quindecile aspect of 75 degrees with his progressed Sun. Yet, on the day of his arrest Jupiter made a hard aspect with Uranus. Usually indicative for a 'relief'.

Of course, not every male born 6th February 1975 will be a child abuser. And not everybody born that day will end up in jail. A birth chart should be regarded in the light of a situation, condition, class, culture etc. The natal chart of Christoper Paul Neil might reveil more, but I am afraid his hour of birth is unknown.

Related:
Mars and Pluto
Venus and Pluto
Resemblance between the charts of Popes
Study of a group of martyrs in Algeria
Geplaatst door Astromarkt op 2:56 PM