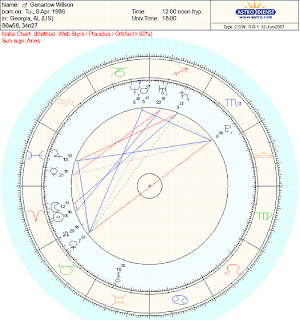 On June 14 this year there was hope for the release of Genarlow Wilson and today he is still in prison. He is there since February 25 2005. And why? Because he and his girl friend were sexualy active. It used to be strongly forbidden in Georgia to have sex under the age of 18. There used to be a punishment of 10 years for this and that is what the judge gave him! Now the maximum sentence is ONE year. He has been in prison for 2,5 years now! Apart from that his name will remain forever on a list of child abusers. For having sex with a girl, not against her wil!

Look at the small trine made by Mars and Neptune with Venus and Pluto. Pluto is semi square Uranus. This could be read as: an arrest (Uranus-Pluto) for a sexual mistake (Venus-Mars-Neptune).

PS dated October 2008:
Genarlow Wilson has been released one year ago and is doing fine! Read it at:
http://www.crossroadsnews.com/articles/2008/10/22/youth/01_genarlow.txt
Geplaatst door Astromarkt op 3:49 PM