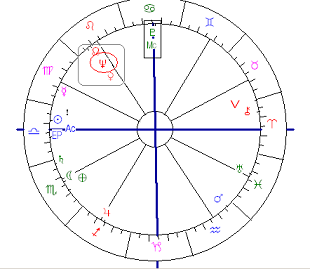 
Jimmy Carter is strongly against the Iraq War and today he stated that the US is torturing prisoners against all international laws. Carter is born October 1, 1924 at 7 a.m. in Plain (Georgia) with Neptune ahead (an idealist or believer) and Pluto on top on the MC (a politician above all) and in mutual reception with ruler 10, the Moon. Pluto trine Moon is his closest aspect. He has a very strong personality. Also his Sun does not make major aspects. That is a 'calling' Sun: he is a leader. No wonder he made it to be a president. Note the conjunction of the oriental Neptune with NNode and Venus that links his ideology and sympathies.

His progressed Sun changed sign about a year and a half ago, when he started to comment the policy of George Bush. At the moment his progressed MC is conjunct the Sun: he is in the limelight. Venus trines his Sun and Jupiter now and Jupiter trines the Northern Node. It seems like he is supported. But the nasty side of it is Pluto semi square Saturn: the disadvantages of politics and hard confrontrations show up. Maybe that, and the transformed Sun, explain his actions.