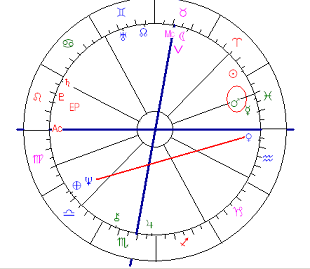 A double relief for Elton John now that the suspected photograph of the exposition of his private collection in Gateshead has been found innocent! The photo was removed by the police and now a study made clear that this was not child pornography... All this happens to Sir Elton John (born 25th March at 16 hours in Pinner) under the influence of Neptune. Neptune is the symbol of gossip, press and suspicion. Neptune also rules pictures (the immaterial, the unseizable). Transit Neptune is now in a square with the MC of Elton John and in a semi square with the MC. Transit Jupiter is opposed to Uranus and inconjunct his MC while Uranus trines his progressed MC. Jupiter-Uranus is for a relief. In this case a double one!
Geplaatst door Astromarkt op 7:13 PM