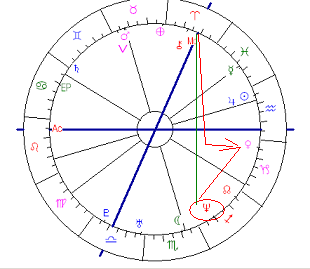 Robbie Williams has been taken advantage of, by so called friends of the football team La Vale, but now he found out. This happened to him during a progressed square between Sun and Saturn (a hard way to grow up). In his birth chart Saturn is in the Placidus 11th house of friends. Another significant aspect is that of the progressed Moon moving over the horizon into the 7th house: a spotlight on relationships. Transit Saturn is inconjunct this progressed Moon now (sadness). Moreover: Robbie has Pluto opposed to Saturn: a hard confrontation going on.

Robbie Williams was born 13th February 1974 at 15h20 in Newcastle-under-Lyme with an almost perfect conjunction of Sun and Jupiter (a combination for success). He also has an oriental Neptune (on the midpoint Ascendant/MC, trine MC) semi square Venus (end ruler of the MC). That is a statement for being artistic.
Geplaatst door Astromarkt op 9:14 PM