CHART OF PICHUSHKIN (CHECK BOARD MURDERS) 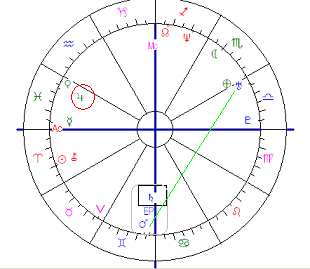 The checkboardkiller Alexander Pichushkin was convicted today. He got life in prison. His goal was to kill at least 64 people (the number of squares in the check board) and he did kill at least 48. He said he felt like a god or a father, being able to decide who would live or die (so he wanted to be an authority...). That is typical, as he has a prominent Saturn square Zero Aries.

The murderous Alexander was born 9th April 1974 and had the Moon in Scorpio calling! (without major aspects: in this case the need to be an authority). Mars is opposed to the Northern Node. Very likely Mars is on a prominent spot in his chart. The trine of Mars with Uranus works as a bridge between Mars and Saturn. Aspects between Mars and Saturn are frequent in the charts of people involved with crime (even crime busters have them...)

Watch the quindecile aspects between Sun and Pluto and between Mars and Neptune and consider the fact that he had an obsessive will to be an authority and that he used alcohol to weaken his victims (mostly alcoholics) before he killed them. And finally see the oriental Jupiter: he became known all over the world.

Today at his trial Jupiter trines his Sun. Jupiter is the planet of judges. And notice that Sun Arc Uranus is inconjunct his prominent Saturn (for a limitation of freedom).
Geplaatst door Astromarkt op 12:27 PM