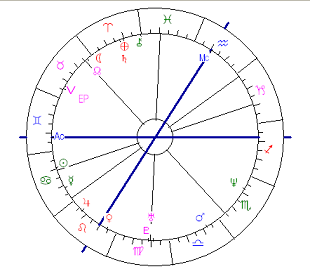 PAMELA ANDERSON: ANOTHER MARRIAGE?
This is what I reported on July 18, 2006

"Pamela Anderson is about to try it again with Kid Rock. She announced her marriage today. Pamela Anderson is born 1st July 1967 at 4h08 a.m. in Ladysmith. Right now Neptune is on her MC and about to oppose to natal Venus on the IC (being diplomatic, estethic or beautiful is part of the profession, this Venus tells us...). Neptune is in her chart square Venus. That is a sign for a romantic person with disappointments in love (due to ideolizing the lover). Let's hope for the best...You can see the lucky event in the progressed MC that is about to make a sesquiquadrate aspect with natal Jupiter, dispositor of the seventh house of steady relationships and marriage."

Now the same transit of Neptune appears and they tell me she is about to marry Rick Salamon, son of the American film- and tv-company Warner Brothers. So apparently, Kid Rock did not make it to the church or she divorced him again.

Pamela Anderson has a golden Yod (a combination of quintiles) of Sun, Moon and Uranus. Her Sun is sesquisqaure Venus and square Saturn. Now it is not uncommon for a star in the States to get married and divorced again, once and a while. But still you may notice that the Sun biquintile Uranus is as difficult for staying married as any other hard aspect between Sun and Uranus is in the chart of a female.

Like in other cases of beautiful women Moon, Venus and Uranus play the major role. The oriental Moon (rising before the Sun) is the end dispositor of the MC and Venus is opposed to the MC. Uranus has a crucial position right on the bottom of the chart. And Gemini (the Ascendant) will help her to keep looking young...
Geplaatst door Astromarkt op 11:56 AM