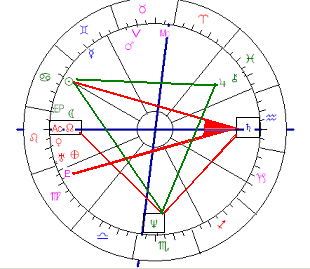 A tragedy for Hunter Tylor (Taylor in the Bold and the Beautiful): her 19 year old son drowned in their pool, after a seizure. It is not the first time something happens to her children. In 1998 her little daughter suffered from cancer in the eyes.

Right now Jupiter (dispositor of the 5th house of children)squares her progressed Ascendant and transit Pluto opposes the progressive Mars and makes an inconjunct with her natal Mars. In her solar return for 2007/2008 Pluto is prominently placed on the descendant, indicating the fact that cases of life and death marks the coming year.

For the hard confrontations Tylor experiences (also before judges and with friends) look at the Yod made by the Sun, Saturn and Pluto. Saturn is crucial on the descendant and as the Apex (inconjunct Sun and inconjunct Pluto). Watch the Void of Course Moon in the very last degree of Cancer, dispositor of the 12th and in the 12th house. There are also indication in the midpoint combinations. Tree times there is a combination made by Saturn, Neptune, Ascendant and another 3 times by Saturn, Neptune and Nodes. These combinations indicate an environment with ill people around (or in the family). Notice that in her chart the crucial Saturn is in a tight square with the equally crucial Neptune, the crucial Node and the ever important Ascendant.

Apart from the drama there is also succes in her life. She has a grand trine in her chart, constructed by Sun, Jupiter and Neptune. The prominent Neptune is the planet for the immaterial (like faith, fantasy and movies).