DID ROBERT MURAT DO IT? 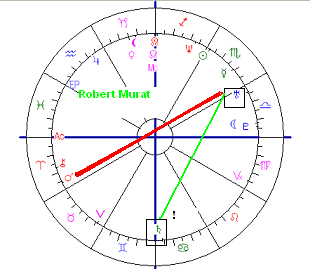 In the case of the missing Madeleine McCann neighbour Robert Murat immediately drew attention. So did his chart...

Robert Murat (20 november 1973) had Mars afflicted by Uranus. Venus is in hard aspect with Mars/Sarturn, Mars/Pluto and Uranus/Pluto. It is no wonder that he was a suspect. He also was related to an East Eurpeon with a dark past sex life. There are connections between the charts of Murat and Maddy.

At the time that I noticed this (when I wrote the message and the article in Dutch called 'Vermist'= missing)I wondered if this ment being involved in the case or in the murder. Now it seems they found DNA of Madeleine McCann in Robert Murats' house.
Geplaatst door Astromarkt op 10:41 PM

Email ThisBlogThis!Share to TwitterShare to FacebookShare to Pinterest
Labels: Criminality, Life and death