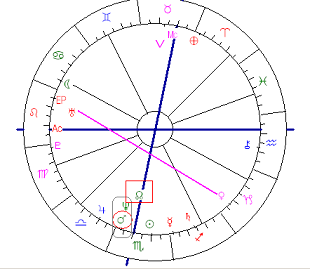 Their charts do not show matches in signs. The composite charts says clearly: Sun conjunct Venus (true love). The fact that a longlasting relationship needs matches is shown in the final end of their marriage now. They did separate before and Cecilia says that she fell in love with someone else in 2005.

She was born November 12, 23h55 in Boulogne Bilancourt. She has a fierce Mars walking ahead of the Sun. The Northern Node is on a crucial spot (the IC) and that shows the interest of relationships in her life. Venus biquintile Uranus ads a creative freedom in love affairs and independancy in marriage. Uranus rules her seventh house of marriage. Transit Pluto is now sesquisquare Uranus, showing the problems of the moment.

Cécilia Sarkozy is a good diplomate. She has a calling Venus (Venus not making major aspects in sign). She was a model once. Venus is for diplomatic skills, arts and beauty. And love, of course:)

I noticed that in the solar return for 2008 her Moon is on the IC, indicating a change in position. And yes, she is no longer the presidents'wife, but she doesnot seem to care about that.

Nicolas Sarkozy was born January 28 1955 at about 22 hours in Paris, according to Astrotheme.fr
In his solar return for 2008 Neptune is on the descendant. I think he will miss her. There is a square between progessed Venus and progressed Saturn in his chart. That is well known sign for separation.

Interesting is, that both have a harmonical aspect between Sun and Moon and a hard aspect between Mercury and Pluto. That tells us they value family life and marriage (...) and that both tend to force their opinion to another person.

Now let's see how they did not match!

She has Sun in Scorpio, he in Aquarius.

She has the Moon in Cancer, he in Aries(they often live apart together)

Note that his Saturn is conjunct her Sun for a difference in social status, age or distance in general. From the very beginning Cecilia Sarkozy refused to be 'the wife of'. Still she succesfully intervened in the case of the Bulgarian nurses held in Libia. You see the chart of Cecilia Sarkozy here above.
Geplaatst door Astromarkt op 12:35 PM