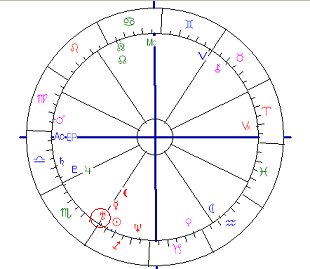 BRITNEY SPEARS
On September 11th I wrote about Britney Spears. I said that the most prominent planet in her chart is Uranus, oriental, ahead of the Sun. Uranus is the planet of sensation, rebellion and shocking news. The most narrow aspect in her chart is Venus square Pluto, connected to the Nodes and Venus end dispositor of the MC. That makes her a sort of a professional femme fatale:). Watch the Moon in Aquarius in the fifth, quintile Uranus and see the playgirl who is shocking the audience in a creative way to draw attention to herself. Lately exhibitionism is the creative way...

For her addictions I like to point at the hard aspect between Sun and Pluto (an almost perfect semi square) and Mars square Neptune. Hard aspects of Sun or Moon with the outer planets (except for jolly good Jupiter) are present twice as much in the charts of alcoholics than in the charts of non-alcoholics (results of a study done by Astrodatabank).
Geplaatst door Astromarkt op 12:02 PM