The fairy tale king and his 12th house castle 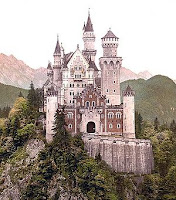 One of the most famous castles in the world and certainly one of the most fairy tale-like castles is Neuschwanzstein in Bavaria (Bayern), Germany. The idea to build a castle in the tradition of the Middle Ages (in the eyes of a person living in the decade of Romance) came from king Ludwig II who wanted a very private place, a refuge. Why? Because he was shy and a romantic person with fantasy. It is so easy to see the need for privacy and isolation in his chart that I just had to show you.

SHY
1. Moon in Pisces
2. Moon in 12th house
3. This Pisces 12th house Moon is ‘ calling’ (no Ptolemaic aspets in sign or orb 5 degrees) so that the need for privacy (Pisces 12th house) could reach any level (mountain high☺
4. Neptune on Midheaven

MOON-NEPTUNE-PISCES
The Pisces Moon and Neptune on Midheaven are in the list of indications for the need to have privacy and in the list of indications for romantic and perhaps artistic talents. Beautiful and more complicated things can’t be created without moments of silence and isolation. And, in moments of silence and isolation creative ideas pop up with more ease. It took the mind, influence and money of a shy and romantic sensitive king to imagine a romantic and fine shaped isolated castle that would impress many many tourists and visitors. But there is a less romantic side: in his final years they isolated him against his will.

His life and death have always been food for fantasy and mystery. In 2007 the granddaughter of a countess revealed a jacket with two bullet holes that explained his strange death (he ‘ drowned’ although he was a perfect swimmer). He never married and there is still a controversy about him being homosexual (or not, which seems to me unlikely). He was engaged to a niece of Sissy and the marriage was cancelled probably for that reason. They limited his freedom in his later years (Saturn/Uranus = Sun/Moon) because he didn’t function as a king should do and because he was too shy to be considered a normal person. They said he had paranoia. Noone knows what more reasons they had…
Anyway, he dreamt and romanced his life away, spending too much money and was perhaps murdered in the end. It is an intruiging story and sad, like all romantic stories, but: with a happy end after death. He left us Neuschwanzstein and inspired Walt Disney…You can see the chart of Walt Disney on Art&Astrololgy, the Astropost blog about the pattern of artistic talents in natal charts…

DEATH
BTW On the day of his death there were many aspects:
- Progressed Mars was semi square progressed Midheaven ( a conflict, fire, shooting)
- both Quaoar and Pholus were in aspect with progressed Venus (preferences and sympathies on a turning point)
- Transit Pluto was conjunct natal Moon and
- transit Uranus trine natal Moon (together a sudden dramatic experience)
- Progressed Moon was square progressed Mars (a period of anger and aggression, need to exercise or be assertive).
(Notice Mars-Uranus-Pluto related to the Moon for a sudden dramatic and aggressive moment)
- Transit Saturn square natal Uranus and semi square natal Pluto (a sudden dramatic ending or farewell)
- Transit Saturn opposition Pholus rx adds the question of ‘ shooting own feet’
- Transit Saturn is sesquisquare natal Midheaven (the frustrating end of a position or condition).
- Transit Neptune inconjunct Descendant (betrayal, grieve or disappointment with a loss involved)

Three years earlier his progressed Sun was square Pholus and opposition Uranus, indicating a sudden and controversial turning point. In 1883 he did nothing more than bestowing the ‘ Bad’ on Kissingen Bavaria as far as we know. However, in this mysterious life a lot of facts remain unknown.

The Moon (house) in Pisces (like a fairy tale) in 12th house (refuge)....the translation for Moon Pisces 12 might be a fairy tale (Pisces) house (Moon) in an isolated place or ment for privacy (12th house)

I recently visited your blog. It is a very interesting one. Keep it up.

Neushwanstein - Stone of the New Swan - is truly a Fairy Tale Castle...

Eccessively sensible to concretely govern in this world, he though to close into a world of romantic “reverie” of Ye Olde Times...

In Luchino Viconti’s film he has been depicted and “captured” very very well...

Thanks for telling about Luchino Viconti.
Luchino Viconti has a 12th house Moon, too (semi square Neptune, with Sun trine Neptune) so he had the tools to ' capture' Ludwig II (a vivid imagination, the need to withdraw sometimes).

BTW It is not Piscean, more Neptunic. The Moon is in Gemini in the 12th house, Neptune is on Midheaven and connected to the Ascendant, too. Sorry! Must be the Bavarian air. The drawing is correct.