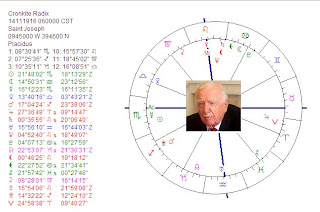 Walter Cronkite was an American broadcaster (Mercury square MC), so his job was strongly related to news. We see Uranus opposition Midheaven to reflect that. The aspects with Midheaven are perfectly telling us what he did: he reported (Mercury) news (Uranus) with style (Venus).

Why was Cronkite so good at his job? It is because of Mercury. With Mercury in aspect with Sun/Moon and ASC/MC he was in heart and soul and all in all a communicator. His voice (Mercury) was world famous. He did precisely what he was good at. With the Moon trine Mercury he was popular as he sort of reproduced the public opinion*). Of course there is more...

MIDPOINTS
There are several midpoint combinations that tell us about his capacities and successes:

DEATH
Walter Cronkite died with typical symbols of death in his chart:

It happened yesterday, on a day with a solar transit conjunct Saturn and inconjunct Sun (on a bad day...)

Also, the progressed Ascendant was close to Mercury, ruler of the natal and progressed eight house of life and death and the most important planet in his chart.

Also see Astro.com for his chart and a bio...