Chart of Maria del Carmen Bousada and twins (no Hob) 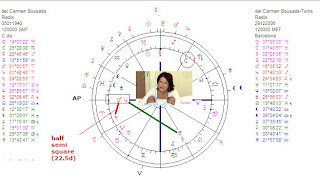 Maria del Carmen Bousada was the oldest mother ever and she died of cancer less then three years after giving birth to her twins. Her date of birth is January 5, 1940 and it was in Cádiz, Spain, but there is no time of birth known. On the day that she was born Mars was conjunct Jupiter on Aries Point, trine Pluto as if to illustrate that the world would know her for her successful production or labour. This combination comes back in the combine chart of her and her twins (Sun square Mars and inconjunct Jupiter, Mars sextile Jupiter).

The Moon rising before the Sun gives an orientation on what is close to yourself and on for example children. She did not have them before she was almost 67, on December 29, 2006 in Barcelona, when transit Saturn was trine her natal Saturn to make it easy (trine) to be old (Saturn) and a parent (Saturn).

Transit Mars was inconjunct progressed Mars for being out of balance, hurt or being in labour (Mars). It is not uncommon to see an active Mars in the synastry with our children because of pain, cuts, injections and scars. Transit Saturn was also semi sextile her progressed Neptune at that time, when she perhaps was feeling the first symptoms of her later fatal illnes. In her natal chart Saturn is inconjunct Neptune as well. That transit activated the existing possiblity of serious illness (Saturn-Neptune).

CERES
If she was born with a Gemini Ascendant (possible, because she managed to lie about her age, so she looked young) Ceres is square Sun/Moon and when she discovered the possiblity of getting pregnant her progressed Sun was square Ceres. That would motivate her strongly, because Ceres is the symbol of motherhood and Sun/Moon is the symbol of what motivates you. For more examples of the effect of Ceres, click the label. More about Ceres? Click here...

TWINS
It will be a shocking change for her children, who deal with heavy transits like transit Uranus square natal Pluto (the symbol of sudden change) and transit Saturn square progressed Mars and inconjunct progressed Neptune (for the lost related to death).