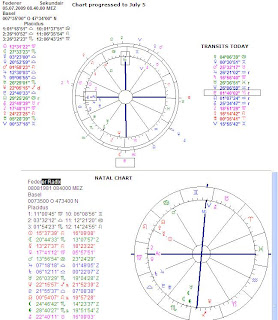 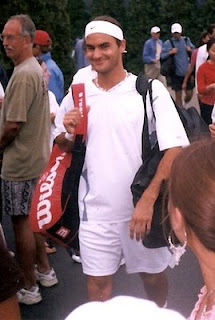 Roger Federer won at Wimbledon and is now the King of Tennis. He is the holder of the record of 15 grand slams (read CNN). Pluto is the symbol of winning and gain. Pluto is important in the chart of Federer, who's midpoint Ascendant/Midheaven (the cross point of the chart) is square Pluto. Today transit Pluto was exactly opposition Federer's progressed Midheaven. That is apparently reflecting the winning position (and stress!).

The natal chart also promissed success. Jupiter is trine Midheaven, Pluto is sesquisquare Midheaven. And Mars is square Jupiter/Pluto for successes in sports or as an entrepeneur. Federer has his own label...

Read the post about
Federer getting married and the Gemini Midheaven for using the hands...