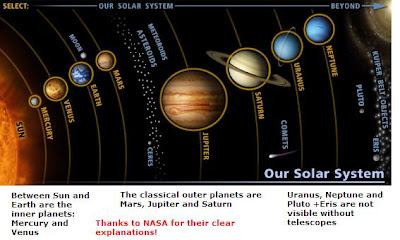 Jupiter is conjunct Neptune in Aquarius this year. As you may see in the picture above, they are not really close. They are in the same degree of Aquarius and we see them in one vertical line from earth and almost at the same height (they are 'parallel'). I am not an astronomer, so I advice you to see for example this site for more information about the astronomical facts: Space.com or go to the site of NASA.
This post is about the astrological combination of Jupiter and Neptune.


JUPITER
Jupiter is in the news today because of the dark spot discovered by an Australian amateur astronomer by telescope. (I think they should name the spot after him (Anthony Wesley). The spot reveals that there was an impact by an asteroid or a very large piece of ice. Had this struck earth, life on earth would have been in serious danger. Jupiter saved us again.

Jupiter is the largest planet in our solar system. The gravitational field of Jupiter is massive and protects the earth. Jupiter is our guardian against asteroids. Jupiter 'catches' them before they reach the earth. I could not write this without Jupiter. Steven Hawking said that intelligent life on earth had a chance thanks to Jupiter.


'What has kept the Earth 'safe' at least the past 65 million years (....) it the massive gravitational field of Jupiter, our cosmic guardian (....)"

!How convenient that Jupiter has always been the symbol of protection and help in astrology. Jupiter symbolizes growth and prosperity!

NEPTUNE
Neptune is not visible from earth and remained unnoticed until telescopes improved. 'Tele' in the words telescope and television is related to Neptune. Tele is another word for 'far'. Neptune is also related to gasses, chemicals, fantasy, art, visions, poison, psychics, movies, plastics, drugs, alcohol, ideology, photography, mediums, the media and dreams. There is an explanation for the reason why for each of those words. Everything that has no real shape or matter or that is fugal is part of the Neptunian atmosphere. Mist, for example.

JUPITER AND NEPTUNE
Jupiter and the sign Sagittarius go together. Before the discovery of Neptune, Jupiter was considered to be 'ruling' Pisces. In some ways Jupiter and Neptune have the same meaning. They are both related to religion, beliefs, traveling and overdoing things. I have no idea what the planets really have in common, except for clouds and spots on the surface that grow appear and disappear.

Anthony Wesley, the Australian astronomer, watches Jupiter about 20 hours a week. He is a true follower of the planet. Fans and followers are symbolized by the combination of Jupiter and Neptune (the great ideal). Another reason to do a post about Jupiter-Neptune!

The combination of Jupiter and Neptune (aspects, midpoints, transits) combines what they reflect. Jupiter/Neptune enlarges (Jupiter) fantasies (Neptune) and successfully convinces those who belief, who empathize and who 'can imagine'. I found the combination in the charts of religious people (see Astromarkt, the chart of 18 popes)'.... One can be considered 'holy' with Jupiter/Neptune prominent in a chart!

Here are a few examples of the possible effect of combinations of Jupiter/Neptune with a third position in the chart:

MERCURY + JUPITER/NEPTUNE
With Mercury, Jupiter/Neptune creates the great story teller because you communicate (Mercury) with the help (Jupiter) of fantasy (Neptune).
This combination is also useful for those who want to sell cars or clothes. Jupiter presents the facts as better than they really are. Neptune covers up and creates a dream. 'Yes, you really look great in that dress!'

When Neptune is in aspect with Mercury/Jupiter the negative side of the combination has a greater chance to manifest itself. An example is Dutch Princess Margarita, who was part of media scandal a few years ago after unproven accusations. Brigitte Bardot and Hillary Clinton have the same combination (Neptune semi square Mercury/Jupiter).
Gandhi, Marcel Proust, Jack Nicholson and Einstein have Mercury in aspect with Jupiter/Neptune. In the chart of Guy Verhofstadt (former Belgian Prime Minister) the combinations appears three times! Richard Chamberlain has Mercury biquintile Jupiter and opposition Neptune; Dustin Hoffmann has Mercury conjunct Neptune and trine Jupiter. John Cleese (Mercury trine Jupiter and sextile Neptune with Jupiter opposition Neptune), Elvis Presley (Mercury sextile Jupiter and trine Neptune and Jupiter conjunct Mercury/Neptune) and Bill Clinton (three times the combination of Mercury, Jupiter and Neptune in the 22.5 degree range) are other examples of people who were helped by fantasy or visions and who had or have many fans or followers because of what they said or wrote. They were able to make others belief in their words.

When you deal with 'ordinary' people with this combination of Mercury, Jupiter and Neptune in their chart, please check and double check what they said. And if you have this combination: try to be as realistic as you can be whenever you make plans.

VENUS + JUPITER/NEPTUNE
In combination with Venus, Jupiter/Neptune creates the fairy tale marriage in the charts of those who married a future king or a famous idol. With Venus you get the highly romantic and social successful marriage (in the eyes of others). The combination of Venus, Jupiter and Neptune is very lucky if you have to pretend to be a great lover or to be in love, for example as an actor. The fairy tale marriage of the tabloids that is subject to gossip is one of the reflections of Venus, Jupiter and Neptune working together. Another possibility is that the nativity is in love with an idol (instead of with a person of flesh and blood). It is a very lucky combination in the charts of artists, because they can use their fantasy, empathy and vision to be successful (Jupiter) in the world of arts Venus-Neptune). They often have female fans and followers or they are very popular idols. They find it ‘wonderful to be here’ and they ‘love you’ from stage.

The dark side of this combination is 'keeping up appearances' of beauty or the happy marriage.
King Albert (Neptune semi square Venus/Jupiter) and Queen Paola of Belgium (Jupiter sesquisquare Venus/Neptune) have the combination in their chart. http://astropost.blogspot.com/2008/04/king-albert-and-delphine-saturn-for.html
It is frequent in the charts of those who did a lucky marriage, like Prince Bernhard, Prince Claus, Princess Máxima who has the Ascendant related to Venus/Neptune and Venus/Jupiter, Mercury/Neptune and Mercury/Jupiter. Her sister in law, Mabel, has Venus semi square Jupiter/Neptune. Boris Becker also has Venus in aspect with Jupiter/Neptune, Michael J. Fox, Oprah Winfrey, Robert de Niro, Walt Disney and Cyrano de Bergerac have Jupiter in aspect with Venus/Neptune.

MIDHEAVEN + JUPITER/NEPTUNE
With Midheaven the career is involved; a devoted audience supports you from a distance (you have a lot fans and followers). Example: Pim Fortuyn, the murdered Dutch politician (who was a devote catholic ánd became a sort of an idol in a short period of time). Four of the 18 popes in my article on Astromarkt have Midheaven in aspect with Jupiter/Neptune.

ASCENDANT + JUPITER/NEPTUNE
The Ascendant - your presentation and situation - in combination with Jupiter and Neptune can reflect a religious environment or a devoted person. Sometimes this combination is reflecting a religious or ideological environment (like in the chart of Putin) or the world of the movies.

SUN + JUPITER/NEPTUNE
In various posts on this blog I have given examples of how Sun and Neptune combinations go together with the love for animals. Add a bit of Jupiter and you get the protection (Jupiter) of animal (Neptune) life (Sun). That is not because Neptune means 'animal'. Neptune cares for the weak ones because Neptune is a softie.
With the Sun idealism is highlighted, like in the chart of Mother Theresa. With Jupiter/Neptune in aspect with the Sun you live by your ideals (and sometimes that is because of a negative attitude towards success).

JUPITER CONJUNCT NEPTUNE IN AQUARIUS
This year there will be two conjunctions (in May and in December) and that strongly influences 2009. The idealistic combination of planets in the sign of change, revival and hope might produce new hope, new ideals and a revival of religious devotion and spirituality. New heroes and idols might show up. (Perhaps one of them is Jupiter, the planet who saved earth:)

PS Jupiter and Neptune together seem to reflect moments of hope (found remedies and vaccins, for example). There was the announcement of a vaccinn in January 2006 (against avian flu) with Jupiter square Neptune. A vaccin against Mexican Flu has been announced around June 11 (Jupiter was conjunct Neptune end of May).

Have to totally agree with Sun/Neptune contacts. I have Sun Scorpio conj Neptune (3 deg orb) in the 9th house and animals have always been my best friends, totally love em, wanted to be a zoologist when I was younger. General sensitivity to anything vulnerable and helpless.
Tot ziens
Lise :^)