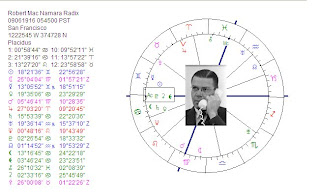 Robert MacNamara died. The former Secretary of Defense was born with an important Pluto (symbol of ‘life and death’, power, money, politics, defense and influence) conjunct his Ascendant and Ceres (symbol of the roots). The combination of Pluto and Ceres seems to be perfect for a person who later became the leader of the World Bank. With Saturn half semi square Mercury/Pluto he had the strategic mind of the politician.

TODAY's TRANSITS
Now he died and these are the transits involved:

In the solar return (for Washington, June 9 2009) Pluto is exactly conjunct the Ascendant. And that brings Pluto back to where Pluto started...in an angular and crucial position.

ENTRY IN POLITICS
When he became a member of the JFK government his progressed Sun had changed sign and so did his life style. The changing sun sign symbolizes a period of change. He first became a CEO (of Ford, in November) and then he suddenly beame Secretary of Defense. The first aspect of the progressed Sun is the conjunction with Neptune. I don't think that that is a good sign. With progressed Sun conjunct Neptune you may start a long period of isolation, rumours, affairs and desillusion (even though you felt as if a dream came true).

MARRIAGE
Robert MacNamara married his teenage love and remained married until the death of his wife, for over 40 years. This long lasting marriage is symbolized by Capricorn on the Descendant and by Venus in Cancer conjunct Saturn. I have no idea what Venus inconjunct Uranus in his chart means but I guess that it has something to do with the long lasting friendship with Katherine Graham. After the death of his wife he started dating her. But in September 2004 (!) he married Diana Masier. That was also an important year. Again his important Pluto has a starring role. Pluto was conjunct the Ascendant, opposition Venus...