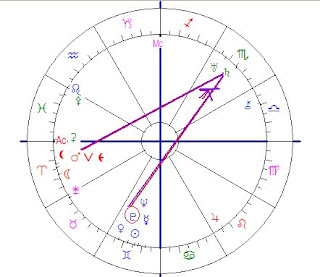 It is amazing to see that there is a Yod in his natal chart that is connecting Mars, Saturn and Pluto. The apex (the planet that the yod seems to 'point at') is Saturn (the planet of old age). Mars, Saturn and Pluto together are the components of the combination of unnatural death (either your own or that of others) as a (rather unbalanced) issue in your life. I can imagine that Mr. Allingham was being confronted with his early past throughout his life and even more when he became 'the last man standing'. Also his father died when he was 1 year old. His mother died when he was 18. Death was important in his life, but...it was not his own. He survived them all.

Saturn does not make major aspects. That makes Saturn a prominent part of the chart, too. The inconjunction of Saturn with Pluto is reflecting the 'excessive die hard' and maybe that is enough to explain why he became so old. Another indication is Aries Point opposition Jupiter/Uranus (so that we know him because of his special prosperity). The Sun is septile Jupiter and Jupiter is 105 degrees apart from the 'calling' Uranus. The prominence of Uranus makes life exciting enough to continue it. As far as I know, he was more an engineer than a fighter in the army (see the 'calling' Uranus without major aspects, also symbol of cars - he was an employee of Ford in the interbellum). He was able to support himself until 2006, when he was about 110 years old!

Air signs like Gemini (the sign of ‘forever young’) contribute to longevity, as you may read in the article about getting old on my site Astromarkt. He credited 'cigarettes, whisky and wild, wild women — and a good sense of humour" for his longevity. The humor is obvious (50% in air signs); Sun conjunct Neptune symbolizes the alcohol and cigarettes.

???
But...All of those indications were shared by the thousands of others who were also born on June 6, 1896 and who died earlier. I can hardly refer to genes as important part of the picture, as his parents both died at an early age. Still, with Ceres exactly opposition Jupiter/Uranus I like to think that he had lucky genetic material. He did not live without enjoying pleasures and he was in the army in times of war and still he survived all that: he must have had a guardian angle on his shoulder.
That makes me curious about his hour of birth and about the positions in his natal chart. It would be nice if Jupiter and Uranus were on the angles of that chart. If he was born at 22:15 hours he would have had ASC/MC square Jupiter/Uranus. That would mark his time and place of birth as a special fortunate one. Unfortunately, his hour of birth is unknown, but we do know the exact time of death. The chart that you see below is the chart of that moment, with the natal positions of Henry Allingham on the outside. 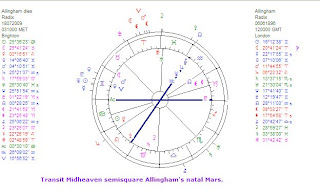 For more examples of very old people on this blog, click the label 'old' on my blog. For a YouTube movie about the 111th birthday of Allingham, click here...