Lance Armstrong and Alberto Contador; a matter of Mars

Lance Armstrong and Alberto Contador keep arguing and wrangling in public. Mars is the symbol of fighting (and competition). Mars is strongly involved in this matter.

Got the picture? Here it is: 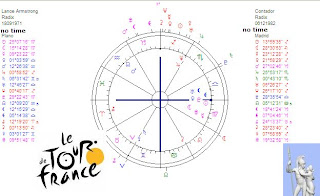 ...the harmonic synastry aspects of Sun and Mars is a square in the composite chart because sextile + trine divided by two is a square (60+120)/2=90 and because they both have a minor aspect between Sun and Mars in the natal charts (sesquisquare and semi square = 180/2=90).

That means that when you ARE team mates and cooperating in harmony (harmonious Mars) there can be an underlying competition (the synastry chart), too.

Well, that explains, doesn't it? It also might just be an overload of adrenaline...