Effect of the sextile (example: Youssouf Fofana and Ilan Halimi)

Today I found a sad example of the disastrous effect of 'harmonious' sextiles. Sextiles unfortunately allow and invite the nasty sides of life, just because of lack of resistance. Sextiles help you find the easy way out. In bad circumstances the best way out seems to be leading you into criminal acts or apathy (sometimes you cannot help it). Sextiles also happen to turn into semi sextiles or squares when you are between 25 and 35 years old. That is when the challenge of the hard aspects is often too hard for the soft sextile. There are other ways to activate the natal sextile aspect in a difficult way: by a transit that creates an aspect like in the natal chart, but (often) with a different distance between the two planets involved. I will explain at the end of this post (giving some examples**)

The nasty effect of the sextile has a better chance in the nasty circumstances of the poor city neighborhood. Ilan Halimi became the victim of the gang of Fofana. Both of them have a lot of sextiles in the chart. They share certain sextiles. And they both have the Moon rising before the Sun. They belonged to different groups. Fofana had radical ideological ideas. The criminal wanted money and thought that other Jews would pay millions for the poor telephone salesman. 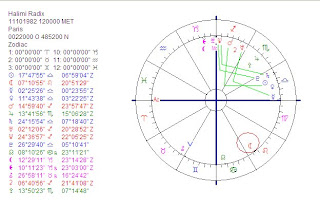 Ilan Halimi was only 23 when he died, in 2006. He was kidnapped by a gang, tortured for 3 weeks and left to die tied up on a tree. In the period that he suffered transit Mars was inconjunct his natal Sun. In his natal chart he has Sun sextile Mars, just like the criminal who was responsible for his painful death. The transit activated the sextile**).

Ilan Halimi's natal aspects mostly are sextiles. With the 2 sextiles and 1 trine of the Moon at Noon excluded (because of the unknown hour of birth) there are 5 sextiles and 1 conjunction. No opposition, no squares, between planets or lights. There is that semi square of Sun and Uranus only. Halimi was a Maroquian Jew in France and that made him 'different' in the local area. He also had Sun 67.5 degrees from Neptune and perhaps that also made him vulnerable. 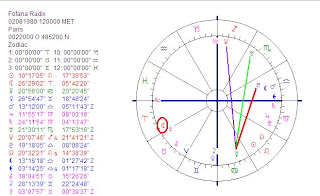 The man who has to spend the rest of his life in jail for what he did to Halimi is Mr. Fofana. Even during the trial he kept insulting Jewish people. He threw a shoe to the public. Youssouf Fofana is a black Muslim, born August 2, 1980, with 4 sextiles in his chart. He also has Mercury square Pluto and inconjunct Neptune and trine Uranus (for radical ideological ideas). Saturn is square Venus and Neptune*).

BOTH: MOON RISING BEFORE THE SUN
With the Moon rising before the Sun he needed to belong to a group of persons. You belong to a group more when you despise other groups. The fact that you are part of the family or group is very important in the life of those with an oriental Moon (they have a strong orientation on habits and belongings).

For more about bias, see the article on Astromarkt...http://www.astromarkt.net/artbias.htm

BOTH: SAME SEXTILES
They shared 3 sextiles (Sun-Mars, Saturn-Neptune, Neptune-Pluto) and one harmonious aspect (Mercury-Uranus). Their encounter was far from harmonious.

SEXTILES DANGEROUS?
Sextiles just make it easy to do (or don't do) certain things. They are not harmonious in the sense that they produce harmony. They are just 'easy'. It was easy for Fofana to hurt Halimi. It was not easy for Halimi to fight Fofana. Sextiles don't ever make it easy to fight. Sextiles lead you to the easy way out (and sometimes even to the exit of life). Even Fofana 'took it easy'. He was the leader of the gang, he didn't have to do his 'job' on his own. He had complices.

Sextiles and trines are frequent in the charts of inmates, I read a while ago (but where o where? Anybody knows?). Does the sextile have a bad impact (searching for the easy way out and for easy gain or leaving you without the capacity to make choices, 'lame')? Kurt Cobain had no squares in his chart (not within 5 degrees of orb in sign). He had 6 trines, 3 sextiles and 3 oppositions. He killed himself. Arhur Wellesley (Duke of Wellington) has 6 sextiles in his chart (and a Pisces Moon) and he was the leader of the British army. He must have had angular positions of Mars or how else to explain the fighter in his chart? Maybe because he could not fight the aristocratical environment that forced young men into the army? Questions, questions, questions and a lot of answers to be found. I will be back on the subject later this year. With Fofana and Halimi as examples the sextile aspect raises enough questions for a study.

*) The combination of Venus, Saturn and Neptune unfortunately often appears in the charts of malicious males like for example the BTK killer with Pluto on Venus/Mars, Venus/Saturn en Venus/Neptune. Perhaps the effect of Saturn in the combination with Venus and Neptune is to limit the feelings of compassion.

**)Activated sextiles...
For example: transit Neptune conjunct your Sun and the Sun sextile Neptune in the natal chart. This transit seems to open the gate to giving up, being a victim and getting isolated and it is even easier to do so when you already want to be alone and dream your life away.
Another example: transit Pluto conjunct your Sun and the natal Sun trine Pluto. This transit forces you to be strong and that is easy for you because you have certain courage.
Third and last example: progressed Sun square Uranus with natal Sun sextile Uranus. Your life style changes suddenly by some nerve breaking incident or accident (that makes you controversial, too). You already know how to deal with those changes (because you have always been 'different' and you are not afraid of changes).