Chart of the first man in space: Yuri Gagarin 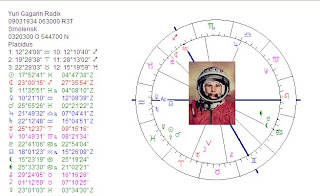 Now that the world remembers that it was 40 years ago that people landed on the moon, it is also time to remember Yuri Gagarin, the first man in space. He was launched on April 12, 1961 with transit Mars trine his natal Sun. He returned safely, but died young in an aircrash after a period of fame and being a sort of an ambassador for Russia (Venus is 'calling' and prominently placed on the Ascendant!).

Yuri Gagarin had an Aquarius Ascendant with a Sagittarius Midheaven and Moon in this chart (data from Astrotheme.fr). The rules (Uranus and Jupiter) were in opposition. His Midheaven is half semi square Sun/Jupiter and 112.5 degrees from Sun/Uranus. Jupiter is septile Midheaven, Uranus is sesquisquare Midheaven. The combination of Jupiter and Uranus is always present in the charts of astronauts (see 'Landing on the Moon').