Landing on the Moon 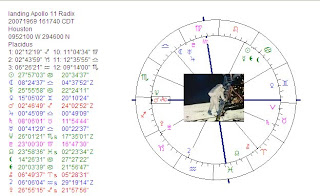 This is the chart of an important moment in history: the moment of the landing of Apollo 11 on the surface of the Moon as seen from Houston. For such a moment you would expect an extreme chart, but it is a rather ordinary one. It is not the chart of the event on the moon. It would be nice to have a chart with coordinates of the Moon and the position of the earth and the planets, but there is no such chart (and I cannot calculate one). Houston was the center of activity, home for the astronauts, so I took this chart.

In the chart the Moon is inconjunct Saturn but that aspect has already been tight and so the critical moment had gone bye. The meaning of Moon inconjunct Saturn is misbalanced and extreme worry (and we know why!:). There is an increasing quindecile of Moon and Node, connecting emotions and groups. Soon after the landing Neil Armstrong would step down the ladder and tell the world about it.

JUPITER
These guys are true travelers. They boldly went were no man had gone before and they safely returned. Jupiter is the planet for those who travel. Jupiter is connected to the Midheaven (career) of the two astronauts who's Midheaven we know.

Chart of the astronauts 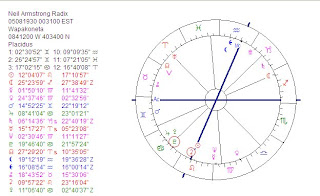 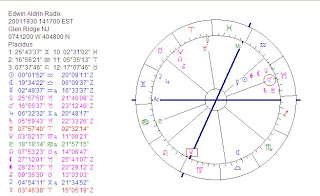 BUZZ ALDRIN
The conjunction of Jupiter and Uranus is trine the Sun of Edwin Aldrin, who has Jupiter sextile Uranus in the natal chart. His Jupiter is square Midheaven and the elevated Uranus is semi quintile MC.
Pallas is elevated in the natal chart. At the moment of the landing Pallas was tightly conjunct his Descendant. Pallas perhaps symbolizes the importance of patterns, but Pallas is also Pallas Athene.
Aldrin is a religious person (Neptune opposition Ascendant and square Jupiter).

NEIL ARMSTRONG
The moment of the landing is exactly with transit Mars on the Descendant of Neil Armstrong. Even the local Ascendant of Houston was opposition his. It is a moment of action, of 'hitting the target'. In his progressed chart Mars was close to the Ascendant as well. Mars is sesqui semi square AC/MC in his natal chart, reflecting the importance of the military (action, sports etc.).

Pallas would be conjunct his natal Moon shortly after the landing.
The Jupiter/Uranus conjunction is quindecile his Uranus (ruler of his Midheaven). In the natal chart Jupiter is inconjunct the Aquarius Midheaven and that is another Jupiter-Uranus combination. In the progressed chart Jupiter already had been square Uranus and the combination of Jupiter and Uranus was in the first degree of Gemini, sextile Aries Point.
Armstrong was born to draw most of the attention (Sun opposition MC).

MICHAEL COLLINS (31 October 1930 Rome, no hour of birth)
The progressed Saturn of Collins (the man who remained in the Apollo 11 and who was responsible for the safe return on board of the 'moonwalkers') was exactly trine Midheaven of the landing. Progressed Uranus was inconjunct the MC of that Moment (for the tension, I guess).

RELATED:
The chart of Edgar Mitchell and the aliens...

The Moon , your menu and your diet..