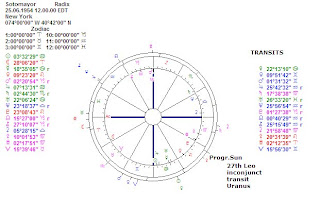 Sonia Sotomayor will be judged today. Is she the right member for the supreme court or is she a biased judge? Probably the Democrats will grant her her function. Some Republicans fear that she is a racist judge. Sonia Sotomayor was born time unknown on June 25, 1954 (says the Mountain Astrologer) in NY. The chart is the chart of her day of birht, at noon.

ORIENTAL MOON
In her natal chart the Moon is rising before the Sun, at any time of birth. Recently I gave two examples of an oriental Moon in the article about sextiles. One man was responsible for the death of another man and the fact that they belonged to different groups (Muslim and Jew) was important for the event. The oriental Moon shows a strong orientation on your own folks.

VENUS CALLING
Venus is the symbol of the judge (the lady with the balance in her hand). Venus doesn't make major aspects in sign or orb 5 degrees, so Venus is what I name 'calling'. She is diplomatic and estethic at any possible level.

MARS-SATURN
Mars is sextile Saturn and that almost garanties that she will do as the law tells her to do and work hard to achieve goals. With the Sun trine Saturn she is being respected, too. Unfortunately the opposition between Sun and Mars makes her very competetive and hot headed (see Café astrology)
Perhaps that is the kind of temperament that a poor girl needs to became a supreme judge. The combination of Sun, Mars and Jupiter is a combination for success.

Mars sextile the angular Saturn (for management) in her natal chart is being activated tomorrow, by Mars inconjunct Mars and inconjunct Saturn. This seems to me to 'strike her' and put her down, very unlikely to happen as all expect her to be chosen. Perhaps there will be some attack on her personaly that 'hits' her.

Another interesting observation is the lack of placements in flexible (movable) signs.

The progressed Sun is aspected by transit Jupiter (opposition), Uranus (inconjunction) and Neptune (opposition), perfectly reflecting the tension, the media gossip and the glory. The result seems already known as the Democrats have the majority. And so she realizes another effect of the oriental Moon...The fact that she belongs to a group was not just important in hard times, it is also important now.

READ ALSO..
Also read the article about bias in the chart, on Astromarkt...
and see the post about sextiles (and the oriental Moon)