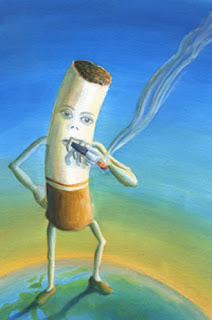 One year ago I wrote about the smoker in the chart of Barack Hussein Obama, President of the USA and I found at least three reasons for addiction (see the link for an explication):

1. Neptune on top, square Sun
2. Moon afflicted by Pluto
3. Mars afflicted by Neptune
I also found a good moment to quit smoking. I noticed that Jupiter was going to pass his Ascendant. That is a fortunate transit...And, guess what happened? He was rewarded the Nobel Prize and he accepted that prize today. Very, very Jupiter (trip abroad, a success, applause!). But, did he give up smoking? I read that he fell back and is still smoking.

Now let's not be depressed about that. When I gave up smoking it was AFTER the passage of Jupiter over the Ascendant, with Jupiter in the first house, because it was AFTER getting good advice about ' how to quit' It is almost time to make up your mind about 2010, isn't it? If you plan to quit smoking, here is the advice that I got when I met mr. Jupiter himself in the woods, walking the dog. He was about 80, walking alone, looked at me, greeted and asked if I smoked. I admitted, and he told me that he had quit 20 years ago and that was what saved his life. See me, he said, I am still walking on my own! But I cannot, I said, I tried but I can't. Then he adviced me to ask the persons who love me if they would be pleased if I stopped smoking and if they would help me do it. OK, I said, I smiled and I walked on. A minute later I tried to find him back to say thanks again, realising that this kind of advice was MY kind of advice but he was gone! I followed his advice, they all supported me (Jupiter is for support) and I haven't smoked since April 3, 1986. If he can see me: TXS, mr. Jupiter!:)

What if Obama just asked his girls?..