Transit Saturn and Pluto and the chart of Hirohisa Fujii 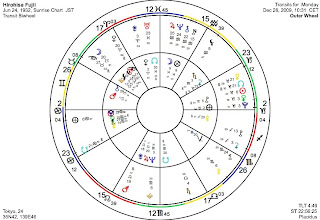 You may never have heard of him before, but Hirohisa Fujii (藤井 裕久?, born June 24, 1932 in Tokyo) is the Japanese minister of Finance. The reason that I blog about him is that he is in the news and that the transits of Saturn and Pluto perfectly reflect the reason why. He is 77 years old and he is in a position of power. Japanese people are among the eldest in the world. But mr. Fujii now has problems (Pluto) with health (Sun) and an ailment (Saturn). Hypertension, probably due to hard working, brought him into hospital yesterday.

He became a minister in 2009 and he very soon found transit Saturn square and transit Pluto opposition natal Sun on his way (the effects of the financial crisis). The disadvantages of power, money and politics showed up at an age when it is harder to be a ‘ die hard’.
For more about Saturn and Pluto, click for the article on Astromarkt or click the label.

BTW The chart (time unknown) above shows a driven person. Mars rises before his Sun and is trine Saturn, and that explains his drive to work hard. He also has Sun inconjunct Saturn. Most often this aspect mirrors an ailment from the start. Sometimes it is reflecting disbalanced ambition or …. Being in charge, but in a way (or at an age!) that does not favor health. Whenever a progression or transit between Sun and Saturn occurs, there is a probability that the ailment starts ' working' . As Saturn is retrograding it is to be expected that there will be more of such occasions. Saturn is the symbol of periods and decades ending. Often with such aspects people step back, have a break etc. It strongly depends on gender, genes, age, condition, situation and of course the complete chart how things will develop.