Uranus and the disaster in Perm (Russia) 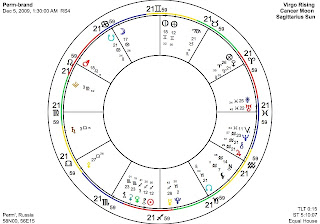 Uranus in Pisces, opposition Ascendant, seems to be reflecting the disaster (Uranus) in the dancesaloon annex restaurant (PISCES) filled with 1000 persons and with only one door to escape. Uranus doesn't make major aspects within 5 degrees. That makes Uranus the most important object in this chart for that moment and place in time. It has been taped on video that you can see on YouTube...

I often notice the presence of Uranus on the angles in case of incidents and accidents. With transit Uranus on your Descendant you may expect nervous situations and maybe then you are lucky, even if you are a celebrity like Woods or Gore. Because I have several examples of less fortunate situations and this is one of them. Uranus in a prominent position and in particular on the angles or trine MC, seems to be reflecting a potential for explosive situation or traffic accidents. Or in more ' neutral' terms: it is reflecting the possibility of a sudden inconvenience (at least) that alters the situation (Ascendant) or conditions (MC) rapidly on the given time and place.(Maybe in a natal chart these positions show a sudden birth, perhaps unexpected and preliminary - in the eyes of the baby). Click the labels to see them on this blog. Or read just one or two other post about an angular Uranus or Uranus trine Midheaven, and disaster:

The bus accident in Spain with Uranus on the Ascendant

Uranus trine Midheaven at the moment of the Fort Hood shooting

And last but not least: the chart of Tsjernobyl with Uranus conjunct Ascendant