Re: the historic extreme long fight between Nicolas Mahut and John Isner yesterday I had a look at the synastry between their natal positions.

Mars sesquisquare Mars
That is a frustrating (sesquisquare) competition

Mahut’s Pholus square John’s Neptune and inconjunct John’s Pluto
The game caused exhaustion, on both sides. Mahut lost (Pluto of Isner inconjunct his Pholus) but (inconjunctions carry a ‘ but’ always…) at a certain price (Pluto). 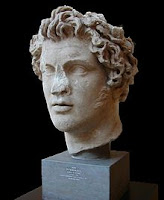 That is how I found a new word for the Pholus vocabulary*) (shooting your own foot, catalyst, turning point) and that is the Pyrrhic victory…a victory that comes at a crippling (sic!...Pholus and the foot...) cost.
The inconjunction contributes to the lack of balance and extraordinary challenge.See the label to find examples of the effect of inconjunctions with Pluto.

HOW ABOUT YOU?
When your Mars is in tight aspect with the Mars in the chart of another person, you might start being attracted to each other (in order to become partners, cooperate or have a friendly competition). In the longer run the competition between you might change and get harder, until you fight each other and you (or both) get hurt. It is rather difficult to avoid competing and anger when there is no compensation coming from Venus...Of course there is competition in sports, always. But when the competers have a Mars-Mars conflict the level of aggression and/or competition rises because of the situation. (Any aspect should be seen in the light of the situation.)