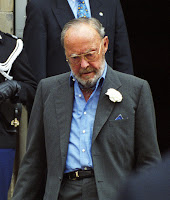 When Prince Bernhard of Lippe Biesterfeld met his later spouse, the Dutch Crown Princess Juliana, transit Jupiter, ruler of his 7th house of marriage and relationships, was conjunct (=on) his Descendant, the starting point of the 7th house.
It was a perfect astrological moment. Also his progressed Sun was about to change sign, like his lifestyle was…Progressed Midheaven trine the Sun promised a bright future.

It was time for a life changing relationship.
You see his chart, transits and progressions for the early months of 1936 here.

URANUS CALLING
Prince Bernhard was 'notorious' for various reasons. Accusations like ‘ Nazi-Prince’, the Lockheed affair (a scandal about getting money for using influence) and facts about his affairs make an astrologer think of Uranus. And indeed, Uranus is ‘calling’! in the house of values, sexuality and ‘life and death’. He survived accidents and surgery like a cat with seven lives! Maybe Sun trine Jupiter and half semi square Uranus helped him get old in spite of all the adventures.
MARRIED WITH AFFAIRS
He never divorced but he and his wife stopped sharing the bedroom in the 50ies. He had Mercury ruler 1 trine Jupiter ruler 7 and Venus trine Mars. But Venus was also square Saturn, semi sextile Neptune. Also there is a  Moon square Saturn and half semi square Neptune. Those are 3 out of 4 aspects that use to lessen the possibility of long lasting marriage in the chart of males. But this guy married a Taurus Princess and divorce was not good for the country (they thought), so they sticked together. The match?
MATCH WITH JULIANA

Sun sextile Sun (they could live together)
Moon in Leo (he was rather luxurious) semi sextile Moon in Virgo (she was rather modest)
Mercury not in conflict with Mercury (neutral)
Venus in Leo contra Venus in Taurus (differences in style, sympathies and tastes)
Mars half quintile Mars (creative reproductionJ
Jupiter sextile Jupiter (matching convictions)
Saturn semi sextile Saturn (not matching moral)
Her Quaoar square his Saturn (a brand new status)
Her Uranus inconjunct his Venus (disrupted relationship)
Her Saturn trine his Descendant (enduring relationship)
This explains why they didn’t live together but remained married. It is one of those contradictions reflecting real life events.
BTW His Saturn was square her Midheaven (he limited her status in the Greet Hofmans affair, the scandal of the Queen getting too involved  with a healer  who claimed to be able to cure her daughters’ eye ailment with prairs).
And think of this: Leo is a royal sign (the lion is the king of animals:).  Bernhard had Moon and Venus in Leo.  His fortunate marriage was important for his status. The ‘ calling’  Juno (symbol of marriage) is trine Midheaven.
HOW ABOUT YOU?
Are you interested in matters of love? See the blog Astrology, Love and Romance for more examples of famous couples, matches, marriages and divorces. Or use the label ' Matching'.
LINK
http://www.astro.com/astro-databank/Juliana,_Queen,_Netherlands
(c) http://astropost.blogspot.com
Geplaatst door Astromarkt op 10:25 PM