There are always questions about twins, time twins and astrology. These questions rise when there is a serious incident such as in Cumbria.
This post is about the differences and similarities in the charts of twins with the Bird brothers birthday (no hour of birth) and the natal charts of Henri and Anton Pieck as examples. It is a longer post than usual, because it is about four people and three charts.

INDIVIDUALITY
People are individuals, and they are different, even if they are born on the same day. Charts of people who are born on the same day contain the same aspect combinations between the Sun, the planets and the asteroids. Shared aspects in the charts often refer to shared experiences, feelings, preferences and capacities. Twins share those aspects in the same situation and with the same genes. That creates an intense bond. But it doesn't equalize them. One can be a killer of 12 and the other one can be the victim, like in the case of the Bird brothers.

People born on the same day may have different aspects with the Moon, other Ascendants, MC's, angularities and (some of the) midpoint combinations. To calculate the positions of Moon,Ac, MC and find angular positions and midpoint combinations, an hour of birth is required. There is no hour of birth for the Bird brothers. So the chart of the day of birth of the Bird brothers show just pieces of a puzzle. We know that they shared a family matter over money and they shared the same dying day. Some of what they shared can be found in the symbols of the chart of their birth day. 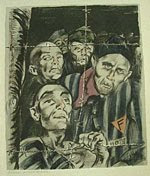 Here are some observations.

A. CUMBRIA TWINS
The killer of the Cumbria massacre had a twin brother (who was killed by him on the day that he committed suicide). He faced the payment of tens of thousands on taxes and feared to be left out of the will of his mother. In anger, he killed his brother, his sollicitor and from then on everybody who was in his way.

Twins have the same day of birth (or are born within hours), so this chart drawing below is shared by the murderer and victim, and by all others born on the same day! The chart of the birth day without hour is like an incomplete puzzle; pieces are missing and variations are still possible. However, it is rather easy to find and 'translate' the known themes and issues.

. the taxi driver (prominent planets of travelling: Mercury calling, Jupiter oriental),
. the money-heirloom issues (Ceres* is calling and see combination of money = Venus-Pluto + the present disappointment and insecurity with Venus-Neptune)
. the family matters: Mars in Libra opposition Eris in Aries: the gods of war and discord are in opposition in the signs of cooperations and make it difficult to remain peaceful, especially because of the aspects with the Moon. Derrick killed his business partner, too.

More observations of the chart of the Cumbria twin brothers:
. Sun conjunct Quaoar: living with a new reality, or creating a new kind of life. This could be a positive aspect, of course, but I found a site (Astronova) that gives examples of accidents and injuries with this aspect (see this link to Astronova. Of course, a new reality is born after an accident, too. Transit Uranus and Chiron are in minor aspect with this conjunction now. They are adding sudden hurt and change and complete the picture of unexpected painful new situations.
. The kite figure in the chart is clear to see, connecting Sun, Jupiter, Moon, Eris, Mars, Saturn and Uranus. There is a bunch of so called ‘harmonious aspects’ (trines and sextiles). Often those easy aspects mirror ‘ the easy way out’ and they are frequent in the charts of inmates. (Choose the label ‘sextile’ to see more examples of the effect.)
Kites are known for their driving force (and the force can be used for good things and for crime; a chart is rather neutral).
. Saturn on Antares , a rather unfortunate combination that might be on a crucial spot in the chart of one of the brothers (angular, for example).
. Ceres is important in the natal chart because there is no major aspect in sign or orb 5 degrees (Ceres is ‘ calling’). That makes any aspect or transit with Ceres an important one. Ceres (symbol of genes, motherhood and heirloom is also important in the transits and progressions on their final day, as you can see in the list of progressions and transits. We already know that there might have been a conflict about heirloon.
(Click the label Ceres for more examples of Ceres in charts.)

Transits and progressions(see chart)
1. Progressed Sun is quindecile natal Ceres
2. Progressed Ceres 75 natal Sun
This is a double Sun-Ceres conflict with minor aspects. The minor aspects aren’t obvious (like major aspects are). Derrick Bird appeared to be calm and nice until June 2, but there was an underlying conflict and a strong focus on heirloom (Ceres).
3. Transit Jupiter is trine progressed Ceres made it easy to succeed.
4. Transit Neptune opposition natal Venus reveals financial disappointment.
5. Transit Neptune 75 Varuna
6. Transit Pholus inconjunct Varuna
Minor transits with Varuna are like mines sometimes.
7. Perhaps transit Pholus is square progressed Moon
If that is so, in the natal chart the Moon in Aries would be exactly square Orcus, conjunct Eris and square Mars and open the doors to domestic discord. Here is the chart with transits and progressions:

B. ANTON AND HENRI PIECK

The lives of the twin brothers Anton and Henri Christiaan Pieck didn't end on the same day or in the same year. They were both talented illustrators, but Henri was also a communist spy whose health suffered badly because of years in Buchenwald. And Anton lived 15 more years. Important differences and similarities in their charts in the progressed and natal chart explain the differences and similarities in their lives.

1. On the day that Henri was arrested (June 9, 1941) he had Saturn on the Descendant and Uranus quindecile the Ascendant in the progressed chart. Saturn-Uranus is the combination of limited freedom. Anton, however, had Uranus on the Descendant, for a shocking change and freedom/independece (Uranus) as a key factor in his situation (AC). Saturn (Henri) and Uranus (Anton) are the rulers of their Ascendants (Capricorn and Aquarius).
Henri is unique in the following midpoint combinations: he has Mars opposition AC/MC, Uranus conjunct Saturn/MC and Saturn semi square Uranus/AC plus MC square Uranus/Pluto. Anton doesn't have these combinations. They refer to the limited freedom again, to the importance of action and activism and to a tendency for radicalism and impuls.

2. They had the same talents.
Anton has Venus 'calling' square Ascendant and MC oppostion Venus/Neptune.
Henri's Venus is close to the IC.
Both brothers have Mercury and Mars in mutual reception as final dispositors of the Midheaven (pointing at an abilitity and practical knowledge). 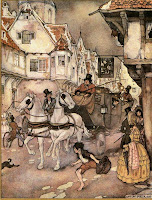 3. Neptune is quindecile the Midheaven of Henri. Neptune is linked to secrets. Read about Mata Hara and Christine Keeler or think of Valerie Plame with Moon in Pisces and Neptune on Aries Point).

4. The MC of Henri is in Scorpio, Anton's was in Sagittarius. Scorpio is the sign of challenges, life and death, research, politics and courage. Scorpio is more in line with the life of a spy, prisoner and political interests than Sagittarius is. Just watch the difference between what Anton created (the joyful picture on the left) and what his brother made (the tragic sketch above).

5. Henri was arrested when his progressed Ascendant had just changed sign (situation change). His progressed chart shows that good times are over (the aspect with Jupiter is past and gone). Saturn is on his Descendant. Both brothers share a delicate period in life: their progressed Sun is exactly on Neptune/Pluto. 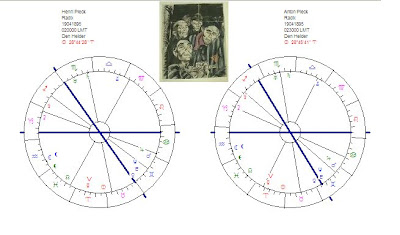 Henri died with T Saturn on the IC (when his condition was less than ever). Here are their progressed charts with transits for the day of his arrest. The picture above shows their natal charts. 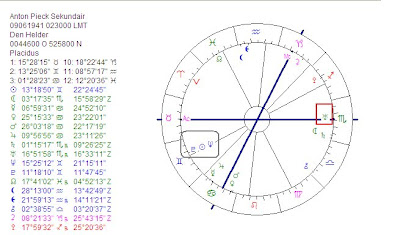 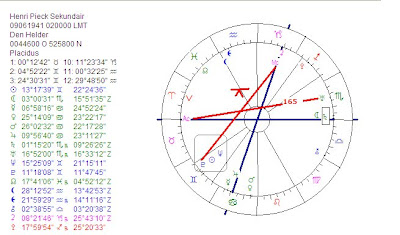 This post shows two things:
1. you can't judge based upon a chart and
2. hours of birth (and in particular midpoint combinations) make a difference
3. part of the explanations can be found in a chart without hour of birth

Even if the charts are almost similar, individuals will try to BE different. I know a female twin born just minutes apart who behave completely different, in spite of having almost the same kind of chart. One is a long married housewife and working mother, the other divorced twice and can't (or won't) find a job.
Especially when the birth chart shows a drive to be independent and unique and make a difference, the twins will try to walk different roads and choose different hobbies, professions and clothes, just to show their independence and individuality. They will elect different qualities and select another part of the 'packet'. Others go for the same road.