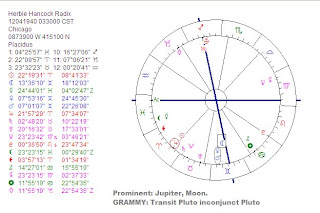 Herbie Hancock was born 12th April 1940 at 3:30 a.m. in Chicago (according to Astrotheme.fr). Herbie is almost 68 and finally got a Grammy, an award for the best album of 2008. This happened to him with a transit from Pluto inconjunct (quincunx) his natal Pluto. Just like in the case of Peter R. de Vries Pluto in aspect with Pluto indicated being rewarded/awarded. I wonder why it is an inconjunction. I think it might be because of the discrepancy between the reward and the efforts that he made to get it at last?
Geplaatst door Astromarkt op 11:38 AM