It seems that Dutch reporter Peter R. de Vries found out where the body of Natalee Holloway is and what might have happened on the night of her disappearance. He is not willing to reveal more until his program will be broadcasted on Sunday 21:30 MET.

WHO IS PETER R. DE VRIES?
Peter R. de Vries has been hunting Joran van der Sloot ever since Natalee Holloway was reported missing and Joran van der Sloot - the last man who saw her alive - started telling different stories about what happened. There are a few messages on Astromarkt about Holloway and Van der Sloot, for example in the article about meeting people and in the article about sharing aspects in relationships. In december 2007 I wrote about the case:

"Another case of missing persons is that of Natalee Holloway. She vanished after a wild night in the Caribeans. Suspect is Joran van der Sloot, but there is no body to proof that Natalee is death, even. I mentioned in the article about sharing aspects this:

"He is born August 6, 1987, Willemstad. She is born 21-10-1986 Birmingham USA. He was the last person who saw her alive, it seems. As he suspected his and her faith are connected and so are their charts. Apart from the fact that his Mars squares her Pluto and Venus (...) they share :
- Sun conjunct Mars (he) and Sun square Mars (she)
- Sun square Pluto (he) and Sun conjunct Pluto (she)
- Both have Mercury conjunct Venus
- He has Jupiter sesqui square Saturn, she has the square"

When she disappeared Natalee had transit Mars semi square Mars and sesquisquare Pluto, activating the dangerous Mars-Pluto connection in her natal chart. Joran had Pluto conjunct Uranus that day and sesquisquare Venus. He also had Mars sesqui square Pluto. So coincidentally they had the same sort of transit on the same day, added with the aspects they already shared. Joran van der Sloot remains a suspect and was recently arrested for the second time, without any results. On December 8, 2007 they released him for the second time."

JORAN VAN DER SLOOT: PRETENTIONS AND KEEPING UP APPEARANCES
On the day he was born Mercury squared Jupiter and both were rising before the Sun. It tells us that exageration is prominent in his life. Sun in Leo with Moon in Capricorn, with a Sun trine Saturn...combined with the Mercury-Jupiter aspect leads to a character of 'keeping up appearances'. Probably he tried to make things look better than they were. He even wrote a book about himself (see picture above), with one chapter about Natalee Holloway in it (this looked a bit like what OJ did). The affair however was life changing for him (and her, unfortunately). The progressed chart shows that in the year of the dissapearance the progressed Sun sign of Joran changed...

SYNERGIE JORAN/DE VRIES
But what interaction is there with the chart of Peter R. de Vries (born 14th November 1956 in Aalsmeer)? The most narrow aspect in the chart of Joran van der Sloot is Mercury square Jupiter (the tendancy to exagerate or pretend). That aspect (in the final degrees of Cancer and Aries) touches the reporters' Northern Node (in the final degree of Scorpio). Neptune of Peter R. squares Mercury-Jupiter of Joran, out of sign and Pluto is making harmonious aspects with that aspect. Mars inconjunct Mars suggests an unbalanced battle. Their Moon's colide (Capricorn and Aries). Apart from the profession of Peter R. de Vries (who's speciality is criminal investigations) there is a personal conflict.

NEPTUNE AND PLUTO: DETECTIVE!
Neptune and Pluto together form the 'detective-combination'. Neptune and Pluto are in opposition with Zero Aries in the chart of Peter R. de Vries! The decective in Peter R. de Vries is challenged by the pretentions of Van der Sloot (Mercury-Jupiter). And as the men don't feel comfortable together (Moon square Moon) and there male senses (Mars) are in signs in discord, the personal link and drive was born.

Above you see the time unknown chart of Peter R. de Vries and the transits of today. 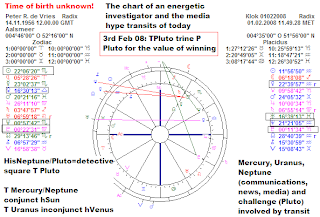