ROMNEY STOPS:
How the quincunxes mark the moment and Saturn plays an important role... 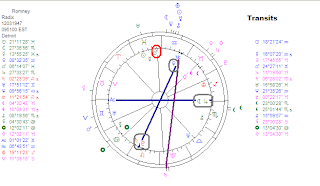 Candidate for the Republican Party in the USA, Mitt Romney, has stopped the race. He is born 12th March 1947 at 9:51 a.m. EST in Detroit (see chart). Transit Saturn is inconjunct his MC right now and opposed to Mars. Also transit Jupiter is tightly inconjunct (quincunx) Pluto. Inconjunctions (distances of 150 degrees) often tell us to 'give up on something'. Notice the position of Saturn low in the chart. This is often an indication of the carreer being at its lowest point.
Geplaatst door Astromarkt op 7:40 PM