BIRTH CHART OF JAIRO WILBER VALERA:
Picture of a criminal 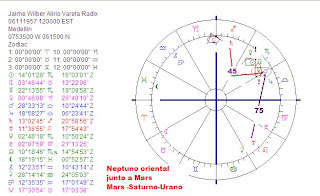 Wilber Alirio Varela-Fajardo alias Jairo Wilmer Varela o Jairo Varela was a murderer, a former police officer who made it in life by becoming the 'capo' in a criminal organisation of drug traficants. He was involved in the finances of the cartel del Norte del Valle.

Look at the picture. Mars is involved in conflicts with Neptune, Saturn and Uranus. A conflicted Mars can be a sign of agression. The Sun and Zero Aries are connected to Mars/Saturn and Saturn/Pluto. The combination of Mars, Saturn and Pluto points at the theme of violent life endings in his life. Look at Neptune, rising before the Sun and conjunct Mars. Neptune is the symbol of drugs. For the finances, see Venus square Aries Point (with possibly a crucial position on the cross for Pluto). He was born November 6, 1957 and died on the 31st of January.

Read all about the influence of Mars, PLuto and Saturn in these articles:
Mars and Pluto
Saturn and Pluto