ROWAN WILLIAMS
Pluto and Uranus cause upheavel in his chart 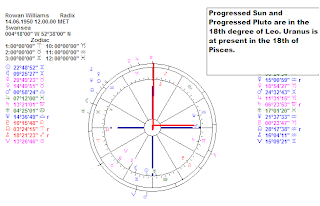 Rowan Williams, British arch bishop, was born 14th June 1950 in Swansea, England. A controversial opinion about the possibility (or inevitability) of introducing the sharia (muslim law) in certain parts of the U.K. caused a media scandal these days. Rowan Williams has Transit Pluto square Mars, right after Mars conjunct Sun and we see, of course, Uranus in action. Uranus is always there were the action is... Transit Uranus is presently inconjunct his progressed Sun and Pluto. Above all that: the progressed Sun is conjunct the progressed Pluto this year. All those are signs of problems, anger, change and the theme of influence, life and death and danger. It seems that he has been threatened.

What made him say this (if he said it)? Let us have a look at his birth positions. We see the Moon oriental (for 'involvement' and 'caring'). We see Mars opposed to Aries Point (for being know as a fighter, a man of action and enterprise). And we cannot miss Mercury. Mercury is in the final degree of Taurus, not making major aspects in sign. I call that a 'calling' Mercury. This makes Mercury a prominent planet and communications (at any level) an important item in his life. The opinions draw attention and/or writing and speaking is his vocation. Some people with Mercury 'floating and drifting' just go on talking and chatting...Mercury is sesqui square Neptune, so maybe he is just misunderstood.

Also notice the calling Sun (for leadership) and how Jupiter in Pisces is biquintile Neptune. Connections between Jupiter and Neptune are always there when religion is involved, either in aspect or in midpoint combinations (and/or in the prominence of their positions in the radix, only known when the hour of birth is known...).

Relevant:
The article 'Conspicuous by Abscence' about the missing link in the chart (the element without placements or the planet without major aspects in sign).