OBAMA/CLINTON:
Their charts for February 21 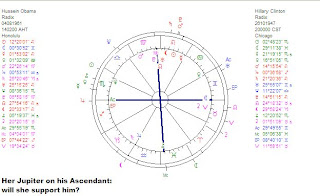 The Texas debate of Obama/Clinton has been set for February 21. I use a 14:02 HOB chart for Obama since a few weeks and said in the article about his chart :
"When he won the IOWA pre-elections using 14:02 we get:
transit Jupiter trine his natal MC today and progressed Moon conjunct Jupiter on the 5th of January (very matching, I think) and on the 21st February he will have progressed Sun trine progressed Jupiter..."

That is very prosperous for the debate day. Hillary Clinton however has tough aspects on February 21. I see: Saturn opposed to MC (but her HOB seems to be questioned) and Uranus sesqui square Sun (perfecting the 23rd). Jupiter is inconjunct the Mars-Pluto connection in her chart. Although the quincunx is supposed to be a difficult transit, I have seen examples of inconjunctions with a good effect. If her HOB is correct, it could mean stepping back. So the 21st we will see...

See the charts of the democratic candidates:
Obama
Clinton