SAINT MARY BERNARDA OR BERNADETTE OF LOURDES
Her chart and progressions 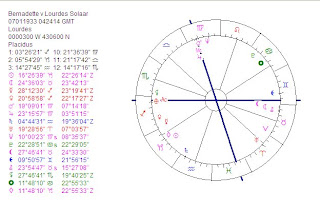 Today the Catholic Church remembers the 'Miracle of Lourdes'. Exactly 150 years ago a country girl, Bernadette Soubirous, now a saint called Maria Bernarda, said she saw the appearance of Mary (the mother of Jesus according to the bible) in a cave. Since then Lourdes is a famous place.

JUPITER CALLING
Bernadette Soubirous was born 7 January 1844 at about 14 hours in Lourdes. Her birth chart shows Venus conjunct her Midheaven, Jupiter (calling, making no major aspects in sign) on top of her chart and the Moon rising before the Sun. She was first of all 'receptive' and 'involved' and above all someone with a conviction. In February of 1858 the progressed Midheaven was conjunct Jupiter. In the months following the visions progressed Moon and Venus also joined Jupiter. And when she was proclaimed a saint in her solar return chart Jupiter was sitting on the MC (and Neptune on top*). And transit Jupiter was inconjunct her progressed MC.
FOREVER YOUNG
Also notice that het Ascendant is in Gemini and trine Venus. It is the symbol for a beautiful woman who looks younger than she actually is. And the amazing fact is that her body seems to remain in good condition since she died.
VISIONS
About the visions: the MC in Aquarius semi square Uranus and Uranus and Neptune in mutual reception is indicating a) that she could have been someone who changes the world by helping others and b) that she was sensitive in a rare way. The Uranus/Neptune combination is frequent in the chart of those who use drugs that make a person get visions. See f.ex. (in Dutch with an international drawing) the chart of Klaas Bruinsma.
JUPITER AND NEPTUNE FOR RELIGION
*) Notice Jupiter and Neptune in the tenth house. The prominence or the midpoint combinations of Jupiter and Neptune are frequent in the charts of idols and religious persons. Neptune is conjunct Jupiter/MC and Venus/Jupiter.
CHANGING SUN SIGN
BTW Her sun sign had recently changed into Aquarius when her life style changed completely due to the visions that she had.