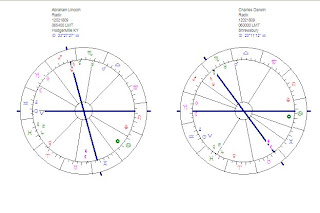 Two very important persons were born on 12th February 1809: Charles Darwin (at 6 a.m. says my Astrolab databank, in Shrewsbury) and Abraham Lincoln at 6h54 in Hodgenville, according Astrolab and Astrothème, so less than 1 hour and a continent away...Still there are remarkable differences between their birth charts.

LINCOLN
Lincoln has a Sagittarius MC conjunct Neptune, a prominent Sun on the Ascendant, a Moon rising before the Sun and the mutual reception of Jupiter and Neptune are the is the final dispositor of the Midheaven routing. Saturn is conjunct the MC.

This man is an idol (Jupiter/Neptune), an idealist who strongly presented himself as a leader (Sun).

DARWIN
Charles Darwin has a Scorpio MC (for influence, investigating, politics, money, sex or cases of life and death). Like Lincoln he has the Jupiter/Neptune mutual reception on the end of the MC routing. And unlike Lincoln he did have something to do with religion as a professional. He studied theology.
Geplaatst door Astromarkt op 4:34 PM