Chart of Roxana Saberi (back in the USA) 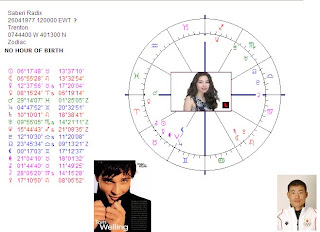 There are many reasons to post about Roxana Saberi (now back in the USA), even though there is no hour of birth. She was born on the same day (April 26, 1977) as Tom Wellings (Smallville) and baseball player Kosuke Fukudome. Other reasons are the interesting progressions and transits now that Saberi returned to her native country:

And notice the natal chart with:

- the combination of restricted freedom: Saturn and Uranus. Saturn and Uranus are in hard aspect with Sun and Mercury, reflecting issues of restricted freedom (physical and verbal*).
- the reflection of energy and action at any level, mirrored by the calling oriental Mars ( her Mars is not aspected and rising before the Sun and Mercury: risk of acting before thinking?)
- the inconjunction between Venus and Uranus, for the love of tension and excitement in a rather disproportionate way.

TROUBLE
Saberi is a journalist and of course a journalist wants to have news and breaking (Saturn) news (Uranus). Being assertive is a good thing for a reporter, too. For Roxana, with Uranus opposition Sun and Mercury, being a writer may sometimes be a nervous and (too) exciting job. With Sun inconjunct Uranus in progression the tension may have been too much now. Uranus is also the symbol of controversy and the limelight because of that. The complete picture tells us that she is likely to try to break the rules and get into trouble, taking risks and being 'in the news'.

THE HAPPY MOMENT
Roxana Saberi has the progressed Moon trine Jupiter this year. Reason to be grateful! It is the best progressed aspect a person can get. It refers to being stimulated, helped and supported. Roxana Saberi had the help of her country and now she is out of the prison in Iran.
Saberi is a journalist. Now that she is safely back home, transit Ceres (symbol of the roots) is trine her natal Sun.

MERCURY RETURN IN PROGRESSION
This year Saberi's progressed Mercury (retrograding in her birth chart) conjoined natal Mercury. She is writing a book and after the episode in Iran she may have found enough material to start (conjunction) writing (Mercury) the book (Mercury!

Mercury is inconjunct Pluto and opposition Uranus in her natal chart. She may be very outspoken in her opinions and her books may likewise have a surprising impact.

ADVENTURES
There is a tight inconjunction of Venus and Uranus in her natal chart that tells us that she loves adventures and risks (excitement) in a disproportionate way (such as in Iran). Another inconjunction is that between Mercury and Uranus (difference of opinion, freedom of ideas). As Mercury is also square Saturn restrions in freedom of speaking and writing may be issues in her life.
Venus and Uranus in the chart of a woman often indicates special beauty and the picture in the chart shows that Roxana Saberi is good looking.

BORN THE SAME DAY
Tom Welling (actor, playing the young Superman in Smallville, broadcasted worldwide) and Kosuke Fukudome (baseball player, winner of the Central League MVP award 2009)) were born on the same day.
Mars is the symbol of sports and action. The fact that Mars is rising before the Sun, without major aspects, tells us about an active and energetic person. This explains baseball. Sport and action will be the first thing that comes in mind with Mars oriental. Mars is the symbol of muscles and who can do without when he is acting to be Superman?

Genes, gender, social position, education, situation...they all matter. The differences in life, career and situation are partly 'written in the stars' but always submitted to culture, history, politics and such influences. Nevertheless, all those who were born on April 26, 1977 may experience a nervous misbalance and sudden changes in lifestyle that may change their views and start communicating about their ideas in a new way. They also will find a reason to be grateful in 2009 and moreover...have success (progressed Jupiter trine Pluto). It is easy to see that process working!
I wouldn't know in what way the theme of restricted independence 'works' in the lives of the two men (though it could just be that they are bound by contracts).