Business relationships can be as strong as marriage and produce or create a product like marriage may create a child. My example of today: Steve Wozniak and Steve Jobs, the Apple guys. Their charts are connected by strong and tight aspects, they share a success indicating aspect and in their composite chart the beneficial Jupiter rises before the Sun.

MEETING
An oriental Pluto, as Noel Tyl says, is reflecting the importance of 'who you know'. Steve Wozniak knew Steve Jobs, a 5 year younger man who wanted to create a personal computer. Jobs met Wozniak with progressed Sun conjunct Jupiter. You can see that as meeting the man who helps you on the right way. The Jupiter of Wozniak is conjunct the natal Sun of Jobs. That is a good sign! *) see the link to Astromarkt and the article about the timing of meeting a partner...

PARTNERS
Now look at the interaction of their charts...There charts (and lives) are strongly related! 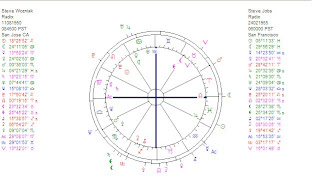 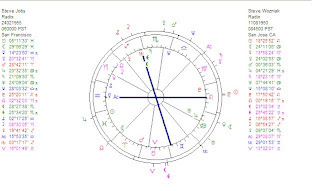 The strongest interaction is between the Moon and the Descendant and between Jupiter and Sun. Those sort of connections are important in the charts of a couple of a man and a woman and just as important in other relationships.
What they share is an aspect between Jupiter and Uranus. Jobs has the conjunction, Wozniak has the trine. They share 'positive change' and being inventive. Sharing Jupiter-Uranus is sharing sudden success.

MERCURY INCONJUNCT MERCURY
It is very interesting that the men have an inconjunct between their Mercuries. This means that their ideas and ways of thinking just don't match. There can be strong differences of opinion. Or different studies. Or maybe they lost interest in working together. Anyway, the inconjunction promisses 'lost contact', different directions for interest and studies.

But first, TOGETHER they started a company and created Apple. From the interaction between their charts you can see that they strongly influenced each other. Jobs'existence (ASC/MC) was of crucial importance for realising the dreams (Sun-Neptune) of Wozniak). Wozniak had/has great sense of style and his chart says that he is above all inventive (a technician, someone who is to make changes). Jobs is the 'inventor', the leader, and salesman (Mercury on ASC, Saturn oriental). Together they were strong with Jupiter rising in their composite chart and conjoined inventiveness.

A YEAR OF CHANGES: 1980
- WOZNIAK
The prominence of Uranus (elevated) and Pluto (rising before the Sun) in the chart of Wozniak made me think of an arrest or an accident (a sudden and unexpected dramatic change). In 1981 he suffered from amnesia due to a private plane crash during progressed Sun conjunct Saturn (experiencing the disadvantages of the way you live). That was a year after he became very rich with Apple.

- JOBS
Jobs has an unaspected Sun (for leadership, drawing attention) and he always was more in the centre of attention than Wozniak was, even though Wozniak is a Leo.
Jobs also has Moon and Mercury without major aspects (for sense of study).
Jobs’s progressed Sun changed sign in the year that changed his life, 1980. Also progressed Mercury was conjunct his Sun. He had Uranus on the Descendant of the solar return (another indication for the change in his life).

More about their story: http://web.mit.edu/invent/iow/apple.html

*) For more about meeting persons at the right astrological moment, see my article on my site Astromarkt.net/artmeetings