The sexuality in Sigmund Freud's chart 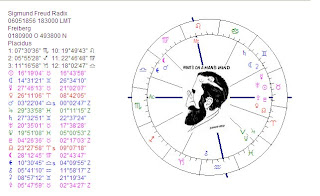 Sigmund Freud was born on May 6, 1956 at 18h30 LMT in Freiberg. He is a famous psychologer and psychiatrist. He is most of all famous because of the fact that he attributed a lot of psychological problems to sexuality. Why was sex so important in his life? Because it was in his chart!:) Three times!

1. Pluto is prominent (3 times)
Pluto is the symbol of power, politics, life and death and of sexuality. Pluto rises before his Freud's Son and is angular (on the crucial spot on the Descendant). And Pluto does not make Ptolemaic aspects in sign or orb 5 degrees.
That makes Pluto the most prominent planet in the chart. As Pluto is three times important the effect in his personality will be strong.

2. Venus <> Mars
Sexual activity is symbolised by the interaction of Venus and Mars. Venus is in the sign of Mars (Aries) and Mars is in the sign of Venus (Libra). The placement in each other's sign is called 'mutual reception'. The mutual reception of Venus and Mars is at the end of the MC-routing (Leo, Sun in Taurus, Venus in Aries <> Mars in Libra). That is an indication for the importance of sexual activity in his career.

These are three reasons for the importance of sexuality in the theories of Sigmund Freud. There is a fourth one...and a fifth...

4. Mars inconjunct Pluto
According to the reading of Cafe Astrology, Freud should have to be less compulsive and forceful to accomplish things. The use of influence, force and strength is rather misbalanced with Mars inconjunct Pluto. Mars-Pluto afflictions sometimes reflect sexual problems.

The perception and presentation of any human being is symbolised by the Ascendant. You see the world (and the world sees you) through the filter of the Ascendant. Freud has a Scorpio Ascendant. Scorpio is related to Pluto, the most important planet in the chart of Freud. And that explains a lot.

*) From the Basics (on my site Astromarkt):
You look nastier. stronger or sexier than you might really be. You are not easy to be approached. The cactus from outside! With bad aspects women are a bitch with this ascendant. You really look brave if you are a man and people might fear you.
Examples? Margaret Thatcher, Grace Kelly, Edit Piaf, Vladimir Putin

For more about the inconjunction, click the label. For Mars-Pluto combinations, see my site Astromarkt.net...

PS One of the interesting ideas of Freud that I found on the internet is: problems with menstruation start in the nose area. They can be treated with cocaine (...).