To avoid misunderstandings: this post describes similarities in charts related to similar experiences only. The Mars-Uranus aspect is not an indication of homosexuality, nor do you need to experience sexual mismatches, as you may see when you use the following links:
http://www.astromarkt.net/mars-in-aspect-with-uranus.html
http://astropost.blogspot.nl/2009/02/chart-of-mata-hari-and-christine.html
http://astropost.blogspot.nl/2013/02/chart-of-oscar-pistorius-and-valentine.html
Charts and aspects are like stats: don't use them vice versa! Mars-Uranus is high speed and short fuse and (that is what I write about here) sometimes to hastily connects people with the wrong sexual orientation.

I like to add that Mars-Uranus aspects are shared by many thousands on the same days and every day (also on NON Mars-Uranus days) a certain percentage of men and women are born gay. Charts don't tell us if they are made for a man, a woman, a cat, a company or an event, so charts can't tell us if a person is or is not gay! Also, many gay persons don't have a Mars-Uranus or Venus-Uranus aspect at all! 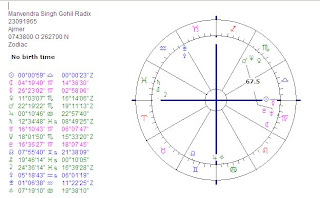 Mars-Uranus is one of the aspects in a man's chart that doesn't make it easy to get or stay married with a woman. That is what astrologer Ram found in the first half of the 20st century. He didn't mention why, but an explosive nature is perhaps not the best nature to stay married.

I think that this aspect (also) might point at the importance of sexual mismatch in a relationship. Gay men are often considered to be women's best friends. But it may not be a good idea to get married to your best friend, when his sexual orientation is not 'hetero', even though there may be sexual attraction.

One year ago I wrote about Margareth Thatcher and Edward Heath. The reason was the story that she had tried to seduce mr. Heath and failed, probably because of his sexual identity. Hmm...their charts don't match at all, so perhaps they were no match:). But there is also his Mars opposition her Uranus in the 5th.

A famous Dutch example is the marriage of homosexual writer Gerard Reve (December 14, 1923, 17:30 Amsterdam) with poet Hanny Michaelis (December 19, 1922, 6 AM Amsterdam). They were married from 1948 to 1959. She has Mars conjunct Uranus in her chart, he too (127.5 degrees). Why did they get married anyway? They have Mars trine Mars and his Jupiter is on her Ascendant. Her progressed Uranus reached his Mars in the year before the marriage.*)

MINOR ASPECTS: SECOND THOUGHTS
Another example of the Mars-Uranus influence is Manvendra Singh Gohil, the homosexual Indian Prince who got married and later divorced because of his sexual identity. The potential of sexual mismatch is in his chart: Mars semi sesquisquare (67.5) Uranus. I consider the minor aspects (such as the semi sesquisquare) as indications for the more intimate aspects of a personality (the person when you get to know him/her better is reflected by the 'chart behind the chart')**).

Another example of a minor aspect between Mars and Uranus and getting married though being homosexual is Dutch actor Albert Mol (03011917 030000 AMT Amsterdam). He also had children with his wife.
Adéle Bloemendaal (actrice) was born with Mars inconjunct Uranus (on January 11, 1933 in Amsterdam) and she married actor/dancer Donald Jones (born January 24, 1932 in New York). He was gay (and his chart has Mars quintile Uranus, Venus opposition Neptune). They had Mars sesquisquare Mars in synastry and got attracted to each other, later divorced and remained friends.

MORE MARS-URANUS EFFECTS
The Mars-Uranus combination does not necessarily need to be expressed in a sexual way. And homosexuals don't need to get married to a women, unless in certain social or cultural circumstances.

There are many other ways to reflect the 'unique and different kind of explosive' energy of Mars-Uranus. There is an article on my site Astromarkt.net with more information about Mars-Uranus combinations. The aspect is frequent in the charts of those who want to be fast with making changes, for example.

The influence of transits of Uranus with Mars is sometimes shocking, as you may read in the article on my site Astromarkt, about the trappist monks of Algeria.

*) It is important to have a look at the progressed charts of a couple. You can read about that in the Astrology of Meeting People on my site Astromarkt.
**) Read about the chart behind the chart of O.J. Simpson...

Interestingly, I've just read a biography of Jack Kerouac. Both he and his friend Neal Cassady had difficult Mars-Uranus aspects; both were homosexually inclined and married women.

ı have uranus square mars and I am straight. I think it is quite reductive and smewhat stupid to tie an aspect to some direct consequence. Describing the effect does better. The thing with Mars squ Uranus is you are immediatyely against any authorithy and take it as a threat to your understanding of freedom. It leads to a lack of having male role models, or dislikle of father figure in general. Gender roles ans ssexuality is mostly about imitating and learning, and performing, so no interest in following after father figures r male role models may end up in a love/hate relationbship that may lead to homosexuality.

Of course it is okay to be homosexually for people who are homosexually attracted but if it leads to a direct frustration with male figures around, as in with every squaresquare it needs to be worked on, introducing a capability of a father figure that does not restrict anybody's freedom of individual expression. Also, this is an aspect traditiopnally cosidered to be used in throwing doen tyranbts and breaking up clacified regimes. So it's association with homosexuality I think işs a cosequenjce of reasoning I wrote above and not really a direct marker. I don't think any direct distinction can be found. I have read three charts with mars squ uranus and none was homosexuals. All three sweet people who want to ruin unquestioned male authorty.

I agree. A: because aspects are not persons.
B. Because of other ways to express Mars-Uranus (as I said in this post, examples
http://www.astromarkt.net/mars-in-aspect-with-uranus.html
C. Because a chart doesn't even show gender, or humanity. So also not being gay or not.
Aspects and examples, like stats don't work vice versa and I should have added that. Thanks for pointing at that!

Very interesting, i have uranus in 7th sq mars in 4th and indeed am gay.