Susan Boyle and the finale (..select your moment...)

This is an easy post, because it is easier to after-dict than to pre-dict and also more 'astropolitical correct'. Here is a belated 'glass ball' that shows what all of you can see, too:
1. the aspects of transitting planets of yesterday and
2. the MC of the final moment of the broadcasting
This of course in combination with the natal positions of Susan Boyle.

In short: there were too many difficult aspects last night. It is a rather alarming picture. There were more than 3 indications for not becoming the winner of 100.000 pounds and a visit to the Queen. Nevertheless: earlier this year (with SA Mercury-Jupiter) she had her contract and she become known all over the world. Yesterday however, was not her best lucky day.

Inconjunctions often reflect a loss. Semi squares indicate possible frustration. Inconjunctions and semi squares dominate the above picture of the transits for Susan Boyle during the finale last night. There is no trine, no conjunction with a beneficial planet.. .

In the earlier post 'Heroes, Angles and Sun inconjunct Neptune' I mentioned the present semi square of transit Neptune with Susan Boyle's Sun and the meaning of Neptune (disappointment), also considering the existing Sun inconjunct Neptune in her natal chart. Transits and progressions with the same combination of planets as aspects in the natal chart are activating the combination of the natal chart. Such 'repeated' combinations have a stronger effect than other transits or progressions. .
And there was even more Neptunic influence...

B. THE MC OF THE FINAL MOMENT (EXIT)
There was another firm indication of disappointment, again with Neptune involved. See the chart below: 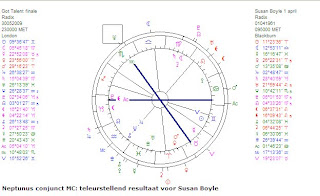 This is the chart of the final moment of the television broadcasting program Britain's Got More Talent. The Midheaven (and/or the most elevated point of the circle, the square with the Ascendant) points at Neptune, Susan Boyle's natal Neptune. When I saw that, I was almost certain that she would not be the winner. During the EC and WC football I used the Midheaven of the final moment of a match and the natal chart of the coaches to try to see which one was happier with the results. I was happy with the method used with football matches!:) There were some interesting results (see the link).

SELECT A MOMENT
An artist has no free will to choose the final moment of the finale and coaches are not able to select the hour of the matches. But you can perhaps choose an hour for an important meeting, just by watching the astrological clock. Maybe it works and if it doesn't, no harm done. Please consider that Susan Boyle has become famous all over the world, even though she didn't win (and see Venus conjunct IC in the solar return: a good year and the progressed Sun in the final degrees of a sign, indicating a life style changing).